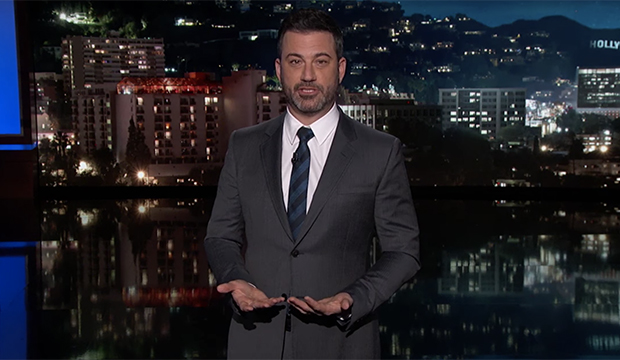 More than a few of our forum regulars had some thoughts about the just-announced news that Jimmy Kimmel will be hosting and executive-producing the 72nd annual Emmy Awards on Sunday, September 20 at 8 p.m. ET on ABC. He previously acted as master of ceremonies for TV’s top honors twice before in 2012 and 2016.

That’s in addition to his handling of hosting duties at the Academy Awards in 2017 when “La La Land” was wrongly declared the Best Picture winner instead of the actual winner, “Moonlight.” That all hell only half broke loose after the gaffe is probably why they asked him back the next year when “The Shape of Water” took the top prize with no problems.

SEE2020 Emmys expand: More nominees for Best Drama, Best Comedy and other categories as number of submissions goes way up

If he could overcome the “La La Land” flub without having a meltdown, the star of ABC’s “Jimmy Kimmel Live!,” which is now in its 18th season, probably can cope with whatever coronavirus curveballs may come his way.

As he stated in the announcement by the network, “I don’t know where we will do this or how we will do this or even why we are doing this, but we are doing it and I am hosting it.” Last year’s Emmys that aired on Fox went the hostless route. But given how this year’s event is likely to be a socially distanced one, someone has to keep the show going and it might as well be someone with a sense of humor.

Besides, both Kimmel and his home network have had more than enough practice doing remote broadcasts with his show during the pandemic as well as with “American Idol” and two Disney Sing-a-Long” specials.

Our forum commentators, however, had more than a few thoughts to share after the news was announced on Monday. The initial comments were somewhat hopeful. As FYC: Maura Tierney for Drama Actress shared, “There is a reason I love the Emmys more than the Oscars  and that is the boldness of their choices. Hopefully, this is a better ceremony than last year.”

SEE How will Covid-19 affect Emmy nominations and winners? [WATCH]

forewardswill, however, shared this more caustic thought: “Everything apart from Kimmel is exciting about this decision.”

thatnerdgreg answered back: “As long as it’s not the other Jimmy (as in Jimmy Fallon, who hosted once in 2010), I’m fine with whoever is hosting.”

Meanwhile, Kay had this to say, “Jimmy Kimmel >>>the other Jimmy and all other prime-time talks hosts (except Trevor Noah). Thank God the show will go on!”

SEE Jimmy Kimmel will host the Emmys for the third time, but how will the show proceed?

Atypical added, “I think Kimmel will thrive in this new hosting environment.”

Maura Tierney for Drama Actress chimed in again and supported that notion: “Premature to say that when we still don’t know what the hosting environment will be or what the format is but yeah I kind of agree he will thrive without category presenters running around and a big fancy packed ceremony.”

smurty11 is not so sure, however: “If anyone else has watched clips from his show, you know he had not adapted well to the quarantine-styled shows. He is a stand up and thrives on a live audience, so his show has been a bit of a bore. I’ll watch for the winners, but not expecting anything groundbreaking or remotely interesting.”

Whatever comes to pass, it will be definitely interesting what a virtual awards show looks like when the honorees are scattered in remote locations. Leave your thoughts about whether Kimmel is a good choice or not below or join in on the discussion with fellow TV fans in our forums.