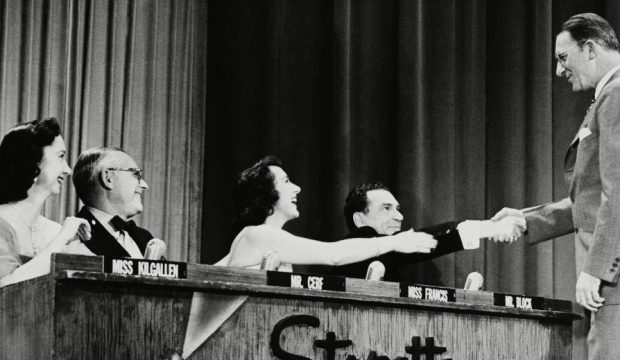 All the world is a game and we are merely players! The Bard will probably disagree with that assessment, but game shows and panel series have been a staple on both radio and television. And they are going strong today.

In fact, there is the GSN cable network, as well as Buzzr which features such series as  “Password,” “Family Feud,” “Tattletales” and “Classic Concentration.” “Jeopardy!” and “Wheel of Fortune” are still among the top syndicated series and CBS’ daytime “The Price is Right” is heading toward its fifth decade of people coming on down. And ABC is back for its summer of deja “view” with new versions of such series as “Match Game,” “To Tell the Truth,” “Press Your Luck” and “Family Feud.” The network also scored with a limited return of its 20-plus-year old “Who Wants to Be Millionaire” with host Jimmy Kimmel.

Back in the 1950s, contestants became stars like Dr. Joyce Brothers who won ‘The 64,000 Question” and Pedro Gonzalez Gonzalez, an immigrant from Mexico who appeared on Groucho Marx’s “You Bet Your Life” and enchanted Groucho, audiences and Hollywood so much he appeared as an actor in such movies as 1954’s “The High and the Mighty.” Hosts also became household names including Bud Collyer (“Beat the Clock,” “To Tell the Truth”), Garry Moore (“I’ve Got a Secret”), Art Linkletter (“People Are Funny) and Herb Shriner (“Two for the Money”).

Though the Daytime Emmys award game shows these days, for years both nighttime and daytime game and panel series were given primetime Emmys. The Emmys  cozied up to the genre from the very first awards.

“Pantomime Quiz,” a charade-style series featuring stars of the era hosted by Mike Stokey, was a big winner at the inaugural Emmys in 1949.  The series, which was also known as “Stump the Stars,” won for most popular television show with Stokey earning a nomination for outstanding television personality. The series picked up nominations for best live show in 1950 and best game and audience participation show in 1951.

My favorite quiz show from that era was NBC’s “You Bet Your Life” starring the one-and-only Groucho and George Fenneman as his announcer and straight man. Though it was a quiz show people basically tuned in for Groucho’s quips and to see if someone would say the secret word so the duck would drop down. The series began on the radio and on television in 1950. It actually continued on radio until 1960 and on TV until 1961-the final TV series it was renamed “The Groucho Show.” The series earned seven Emmy nominations during its run including one for best comedy show in 1952. And Marx earned an Emmy in 1951 for most outstanding personality.

Contestants included a young Candice Bergen and The Exorcist” writer William Peter Blatty, who disguised himself as an Arab prince and won $10,000 enough to allow him to quit his day job as a publicist and concentrate on his writing career. Blatty and Marx remained friends over the years. In fact, both Blatty and “The Exorcist” director William Friedkin told me they had tried to shoot a joke scene with Groucho and send it to the executives at Warner Brothers in Burbank.  It was going to end with a duck coming down in Regan’s bedroom with a secret, albeit, R-rated word.

The genre was also touched by scandal.

AMC’s current miniseries “Quiz” examines the trial of a former army major in the Royal Engineers who won $1 million pounds on “Who Wants to Be a Millionaire?” in England in 2001 and was convicted with his wife of cheating. And Robert Redford’s Oscar-nominated 1994 “Quiz Show,” chronicled the corruption that brought down NBC’s red-hot “Twenty-One” in 1958.

The CBS and NBC “Dotto,” also was abruptly cancelled in 1958 because it was learned the show was fixed by the producer. Other series that suffered because of the headlines were CBS’ “The $64,000 Question,” which won the Emmy in 1956, and its sister series “The $64,000 Challenge.” Both ended their run due to the scandal.

Most game and panel series avoided scandal including the long-running “Truth or Consequences,” which began on radio and over the years ran on CBS, NBC and syndication. It won the Emmy in 1951 for games and audience participation show.

One of the most erudite panel shows was “What’s My Line?”  which aired originally on CBS from 1950-67, was also one of the most lauded. Hosted by Emmy Award-winning newscast John Daly and featured such panelists as humorist Fred Allen, publisher Bennett Cerf, actress Arlene Francis and columnist Dorothy Kilgallen. The series received three Emmys with Daly earning an Emmy nomination in 1956 for his hosting chores.

Audiences couldn’t get enough of the student quiz show “The General Electric College Bowl,” which began on radio in 1953 and moved to TV in 1959, airing on CBS until 1963 and then NBC until 1970. It won the Emmy for outstanding program achievement in the field of panel, quiz or audience participation in 1963 beating out CBS’ “Password All-Stars’ and CBS’ “To Tell the Truth.”

One game show that certainly never earned an Emmy nomination was CBS’ 1961 “You’re in the Picture,” hosted by Jackie Gleason that ran one episode. Actually, it loosely aired twice because on the second telecast Gleason appeared basically apologizing for the show. “There’s nothing here, except the orchestra and myself,” he said. “We have a creed tonight, and the creed is honesty. Last week we did a show that laid the biggest bomb-it would make the H-bomb like a two-inch salute.” It was the Great One’s only attempt at the genre.