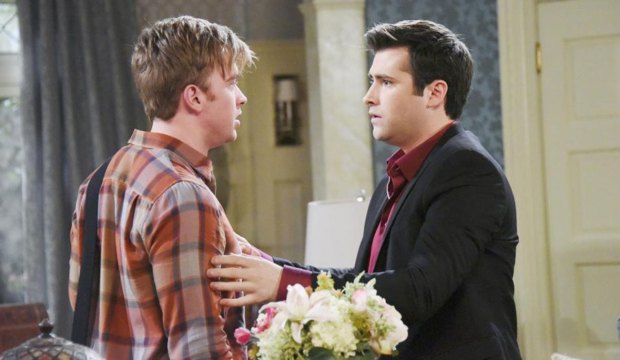 Who were the best LGBTQ couples in daytime soap opera history? The sad truth is that there aren’t that many to choose from. Despite the shows dipping their toes in the water with queer characters and storylines in the 1990s — like Ryan Phillippe as groundbreaking gay teen Billy Douglas on “One Life to Live” from 1992 to 1993 — the show shied away from romance for its queer characters until the 21st century. Scroll down to read some of our forum posters’ favorites below.

In 2000 “All My Children” made history when Bianca Montgomery (played by Eden Riegel) came out as a lesbian. As the daughter of Erica Kane (Susan Lucci), it was the first time such an important legacy character was written to be gay. She had a few romances over the years, including twins Frankie and Maggie Stone (Elizabeth Hendrickson), though not at the same time. And her 2009 marriage to Reese Williams (Tamara Braun) was the first legal same-sex wedding in soap opera history.

Other shows in the first decade of the 21st century introduced gay characters, with mixed results. On “General Hospital,” Lucas Jones (then played by Ben Hogestyn), the adopted son of Bobbie Spencer (Jackie Zeman) and Tony Jones (Brad Maule) came out as gay, but he didn’t get much romance before he was written off the show in 2006; the character returned to the canvas played by Ryan Carnes in 2013.

“As the World Turns” wrote Luke Snyder (Van Hansis) as gay. The son of supercouple Lily and Holden Snyder (Martha Byrne and Jon Hensley), he got a couple of major romances, first with Noah Reid (Jake Silbermann), with whom he shared daytime’s first gay male kiss, though their romance was portrayed as far more chaste than soap operas usually depict heterosexual love stories. Luke later fell in love with Reid (Eric Sheffer Stevens) in 2010, but then Reid was killed off shortly before “ATWT” was cancelled.

In the late 2000s “OLTL” introduced the closeted Oliver Fish (Scott Evans) who was in love with Kyle Lewis (Brett Claywell), but they were both written off the show shortly after they got together. Around that time “Guiding Light” explored same-sex attraction with the long established character of Olivia Spencer (Crystal Chappell), who had been portrayed as straight but started questioning her orientation as she fell in love with Natalia Rivera (Jessica Leccia).

SEEWill Eva LaRue finally win a Daytime Emmy for her guest role on ‘The Young and the Restless’?

Queer characters became more normalized in the 2010s, though not to the extent of a lot of prime time and cable media. “Days of Our Lives” invested heavily in Will Horton (Chandler Massey), who came out as gay, had many front-burner storylines, and even had a prominent love triangle with Sonny Kiriakis (Freddie Smith) and Paul Narita (Christopher Sean), both of whom were also legacy characters from important families on the show.

And “The Bold and the Beautiful,” which went decades without any major queer characters despite being set in the LA fashion industry, introduced the transgender Maya Avant (played by cisgender actress Karla Mosley), who married cisgender Rick Forrester (Jacob Young). So who has had the best LGBTQ love story in soap history? See some of our forum posters’ responses below, and vote in our polls at the bottom of this post.

EmmyLoser: “I think my all-time favorite love story might actually be Will and Paul on ‘Days.’ Will and Sonny are great, and I loved Will’s initial coming out story, which had a lot of fun elements in addition to being heartfelt. The trouble I had with Will and Sonny initially was that they really just seemed like friends. What I loved about the story with Will and Paul is that it felt more like a soap opera storyline, where there was a love triangle and people actually had options. I was also a fan of Kyle and Fish on ‘OLTL.’ I jumped back into watching the show for the two of them. I also started watching ‘ATWT’ for Luke and Noah, but that storyline wasn’t nearly as strong as the other ones we’ve mentioned … If we can talk hypothetical couples, Will and Chad (Casey Deidrick) had smoking hot chemistry, almost as hot as Will and EJ. Chandler Massey has great chemistry with basically everyone.”

FreemanGriffin: “Will and Sonny are my all-time favorites. and I loved Will and Paul and Sonny and Paul too! Luke and Noah were great but then so were Luke and Reid. Giving all 3 of them horrible endings was something I never forgave ‘ATWT’ for. Kyle and Fish were great on ‘OLTL.’ There haven’t been all that many. Bianca and her girlfriend, the first one (what was her name?) was really good. Mariah and Tess was hampered for me by Tess not being very interesting.”

syrus80: “Kyle and Fish! Plus they had the best sex scene out of any of the gay couples. Luke and Noah! ‘ATWT’ never treated them right! Sonny and Will! Will had chemistry with the 1st Chad but the show opted to bring on Sonny and paired him with Will instead.”

Boz: “Fish and Kyle will always be number-one. That said, Will and Sonny from Days of Our Lives were pretty cute.”