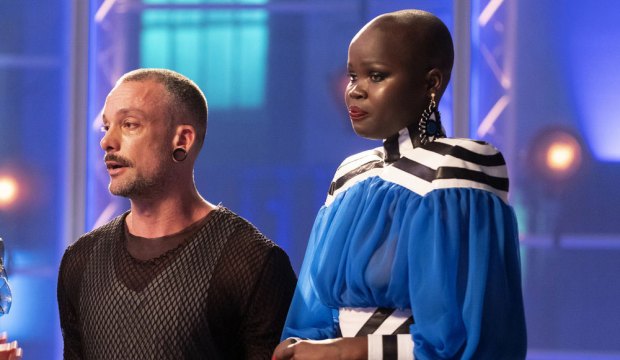 There are only seven designers left in the competition on “Project Runway,” so who from this cream of the crop will be eliminated next? Could it even be the lovable Geoffrey Mac? That’s what “Runway” fans are saying who have placed their bets for tonight’s show here in our predictions center.

As of this writing Mac gets leading 51/20 odds of being eliminated. This comes after he landed in the bottom three for the second time in “Sheer Genius.” The challenge was to create editorial looks with translucent materials, and he had one of the boldest, riskiest looks, concealing his model’s breasts with pasties underneath his barely there material. The heart-on-his-sleeve designer was sad that the judges didn’t like it, and safe designer Brittany Allen was surprised that his look wasn’t in the top three.

But Mac explained that he often designs performance looks for fearless women, and explaining that point of view made judge Elaine Welteroth like his design a lot more, while Nina Garcia credited him with creating a look that was undoubtedly editorial, even if the panelists didn’t think it was entirely successful. So he was quickly excused from the bottom. The bottom two were Chelsey Carter and Victoria Cocieru, with Carter being eliminated.

Carter was sent home even though she had won a previous design challenge (“There is Only One You“) and had never been in the bottom three before. Meanwhile, this was Mac’s second time at the bottom following his jumbled look in “Cats of the Urban Jungle,” for which he barely survived elimination. So he can’t afford another misstep since there are only six other designers left in the competition, only five of which the judges can send home (Sergio Guadarrama won last week’s challenge, which won him the season’s last immunity).

Guadarrama actually ranks second in our elimination predictions with 17/5 odds, but for that to come true he’d have to voluntarily withdraw from the competition or be disqualified for some other reason. Stranger things have happened. Cocieru ranks third with 5/1 odds after landing at the bottom last week for the second time in a row. Marquise Foster, who was eliminated in “Project Runway X Ashley Longshore” but returned after the withdrawal of Dayoung Kim, rounds out our top four with 11/2 odds of elimination.

Do you agree with our readers’ consensus that Mac is going home? If so, a lot more warmth is about to leave the workroom.