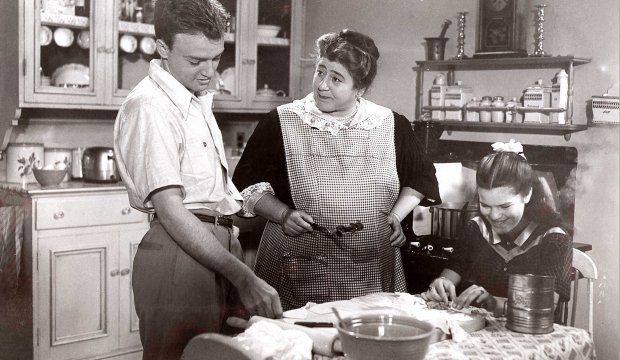 Here’s a quick trivia question for you. Who won the first Best Actress Emmy?

If you were thinking Loretta Young, Lucille Ball or even Imogene Coca, you’d be far off the mark.

It was none other than Gertrude Berg. The actress/writer/producer/creator was named best actress for her beloved sitcom “The Goldbergs” at the 1951 Emmy Awards. In fact, she had played the role of the warm matriarch of the Jewish immigrant family for nearly two decades when she picked up the statuette. The year before, the series was nominated for best kinescope show but lost to “Texaco Star Theater” hosted by Uncle Miltie.

Of course, these days Berg is nearly a forgotten figure. And audiences only know of the popular ABC series “The Goldbergs” about a Jewish family in the 1980s. Aviva Kempner, the director of the well-received 2009 documentary “Yoo-Hoo, Mrs. Goldberg” told me for a L.A. Times piece on the series that she is basically unknown today because “she was too early. She was Oprah before there was Oprah.”

Berg has paved the way for so many successful creative women including such award-winning actress/writer/creators as Phoebe Waller-Bridge, who won numerous awards including multiple Emmys for her Amazon Prime comedy series “Fleabag.”

It was in 1929, when the 15-minute series “The Rise of the Goldbergs,” a comedy with dramatic overtones-it would be retitled “The Goldbergs” in 1931-about a Jewish family who lived in an apartment in 1038 East Tremont in the Bronx premiered.

Besides Berg’s Molly, the cast included husband Jake, daughters Rosalie, son Sammy and Uncle David.  The series not only looked at Jewish immigrants but spoke to various immigrants in the U.S. who were striving for the American Dream. And in 1939, they fulfilled their dream by moving out of the tenement and into a home in Connecticut.

But the radio series appealed to more than just immigrants; Gentiles loved this lively Jewish family. There is a legend that President Franklin D. Roosevelt once said that he didn’t bring the U.S. out of the Great Depression, it was the “The Goldbergs.”

And though on the surface, Molly was the stereotypical Jewish mamma, she wasn’t anything but a stereotype. She was like chicken soup for the soul. Warm and comforting. A Jewish writer once wrote that the series did more than “to set us Jews right with the ‘goyim’ than all the sermon preached by the Rabbis.”

“I don’t think it was a coincidence that a Jewish woman was writing the most positive portrayal of a Jewish mother at a time of domestic anti-Semitism and the Holocaust,” said Kempner. Audiences loved Molly’s turn of a phrase from her signature “yoo-hoo” at the beginning of the series to such “Mollyisms” as “Come sit on the table, dinner is ready. You’ll swallow a cup, darling?” and “Throw an eye into the ice-box and give me an accounting.”

Born in 1899, Berg grew up in an immigrant family in Harlem. Her father owned a theater in New York and a resort in Catskills. And it was while she was at the resort that she began writing scripts for the hotel’s shows. And in the 1920s, now a married mother of two children, Berg began writing scripts for radio shows and even began some acting. She recreated her first series for CBS Radio in 1928, “Effie and Laura,” about two salesgirls. Berg also starred in the series which lasted only one episode.

But she hit pay dirt when she drew inspiration from her childhood creating ‘”The Goldbergs.” The series was so popular, Berg and her actors went on tour in 1934.  And the show even spawned a comic strip. “The Goldbergs” had an extraordinary run ending in 1946.

The series frequently turned dramatic. In a noted 1939 episode, a brick is thrown through the window as the family sits down through the Passover Seder dinner. And the remarkable 1942 episode  “Sammy Goes into the Draft”” spoke to all families whose loved ones were heading off to war. That installment was added to the National Recording Registry in 2013.

Two years after the radio series ended, Berg wrote and starred in the Broadway play “Me and Molly,” which was set in 1919. The play ran 156 performances. “The Goldbergs” television series premiered on CBS premiered in January, 1949. The series was telecast live but without a studio audience. It was an immediate hit. Not only did she write and star in the series, she also found time to co-write and star in the he 1950 film version “The Goldbergs,” which marked the film debut of Barbara Rush.

The series was airing during the height of the Hollywood Blacklist. And in the early 1950s, Philip Loeb, who played Jake and was a leader of the Actors Equity Association, was blacklisted for alleged Communist sympathies. Though the accusations were unproven, and Loeb denied he was a Communist, the series’ sponsor Sanka told Berg she had to fire him.

Berg, who owned the radio and TV series, wouldn’t and attempted to find a new sponsor. CBS dropped the show in 1951. NBC picked it up in 1952, but informed Berg the Peacock network wouldn’t air the series if she didn’t fire Loeb. Berg finally relented, but reportedly kept him on the payroll. Loeb tragically committed suicide at the age of 64 in 1955.

The series continued on CBS through 1953 before moving to the struggling DuMont network in 1954. Because of financial difficulties at DuMont, the network couldn’t fulfill its contract for the series. A syndicated version now set in a New York suburb was shot on film in 1955 and aired through 1956.

Berg played Molly two more times in 1957 on a Ray Bolger musical-variety series on a Kate Smith special. She left television behind in 1959 starring with Cedric Hardwicke in the romantic comedy-drama “The Majority of One,” winning the Tony.

Berg earned an Emmy nomination for her last series, CBS’ 1961-62 “Mrs. G Goes to College,” which was retitled “The Gertrude Berg Show.” Her son Cherney Berg, who had produced and written a few episodes of the syndicated “The Goldbergs,” was the primarily writer on the series. The series never caught on with audience.

Seven years after her death, a new Broadway musical “Molly,” staring Kaye Ballard in the title role and directed by Alan Arkin, had a 68-performance run.

UCLA Film & Television Archive has restored numerous episodes of the both the radio and TV series. Episodes can be found on Amazon and YouTube. Check them out.