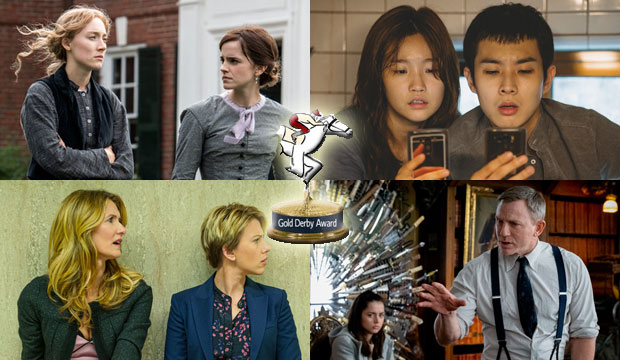 As voting for Oscar winners gets started on January 30, voting for the 18th Annual Gold Derby Film Awards is winding down. You have until the end of the night on Saturday, February 1, to visit our predictions center and vote for your favorites if you haven’t already. And if you have already voted, feel free to make changes to your ballot as many times as you like: none of your choices are final until voting closes. Check out the complete list of nominees here.

You need to be a registered Gold Derby user to submit a ballot. You can register quickly and easily right here by using your Facebook, Google or Twitter account, or with any email address you like. Voting for the nominations was conducted by a preferential ballot in which you ranked your favorite contenders. To pick the winners, though, you’ll simply pick one nominee from each category as your favorite. Whoever gets the most votes wins.

To refresh your memory, “Parasite” and “Once Upon a Time in Hollywood” were the top films with 11 nominations apiece including Best Picture. The eight other nominees in that top category are “The Farewell,” “The Irishman,” “Jojo Rabbit,” “Joker,” “Knives Out,” “Little Women,” “Marriage Story” and “1917.” We nominate a guaranteed 10 films for Best Picture, unlike the Oscars’ sliding scale between 5 and 10 nominees (this year the academy nominated nine).