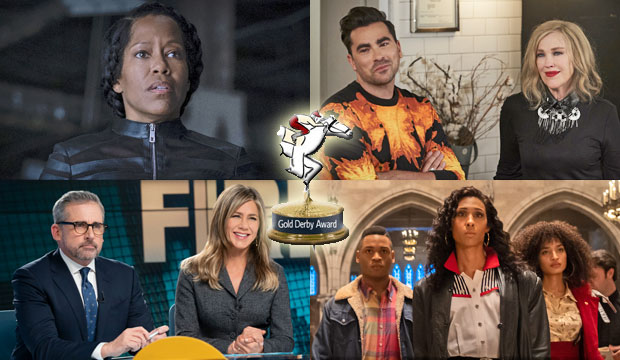 Voting for Primetime Emmy nominees started on July 2 — later than usual since the entertainment business was upended in 2020 by the coronavirus pandemic. So our Gold Derby TV Awards voting process was also pushed to July, but the time has now come for you to vote for nominees in our 17th annual kudos honoring the best television that aired between June 1, 2019 and May 31, 2020. And Gold Derby observes the same hanging-episodes rule as the Emmys, so shows that extended into June like “Insecure,” “I Know This Much is True” and “What We Do in the Shadows,” among others, are eligible in their entirety.

Gold Derby has some of the most devoted and informed media watchers on the web, so we launched our own awards for film in 2002 and for TV in 2004. You can pick your favorites in the Gold Derby TV Awards 2020 Nominations in a wide variety of categories by visiting our predictions center here. Support TV’s best shows, performers, and even your favorite drama and comedy episodes; longlists in episode categories were compiled by surveying our forum posters.

To vote, just click on a category at the top of the event page. Below that, grab contenders one by one from the left column and add them to the right column by clicking on the green + symbol. Arrange them in order of preference (number-one is your top choice). You can drag each entry up or down as you see fit. And the order matters: your top choice gets three points, your second choice gets two points, and your third choice gets one point. In the race for Best Comedy and Best Drama you can vote for up to four shows, so your first choice there gets four points, second gets three, third gets two, and fourth gets one. The contenders with the most points will be the nominees.

You can vote now and edit your ballot as often as you like before voting ends on Sunday, July 26. Nominations will be revealed on Thursday, July 30. None of your votes are final until voting closes, so don’t hesitate to jump in right now with your initial picks. (See the photos at the bottom of this post for an illustration of the voting process.)

Last year “Game of Thrones” won Best Drama Series for the fourth time, setting a new record for the most victories in that category. That broke its tie with “Lost,” “Mad Men” and “Breaking Bad,” which had three victories apiece — though “Breaking Bad” got the last laugh soon after our 2019 kudos when our users named it Best Drama Series of the Decade. But now that “Thrones” is out of the way, the door is open for a new winner.

There’s also a chance for new blood in the race for Best Comedy Series. Last year’s champ, “Fleabag,” is off the air. The show that won the year before that, “Atlanta,” didn’t air any new episodes during this eligibility period. And the two-time winner before that, “Veep,” has also ended its run. In fact, the only past victor eligible to be nominated again this year is “Modern Family,” which previously won in 2010 and 2011. This is the last hurrah for ABC’s long-running sitcom.

Only three of last year’s nominees for Best Comedy have a chance to return this year — “The Good Place,” “The Marvelous Mrs. Maisel” and “Schitt’s Creek” — so that category is wide open for nominations and the win. But most of the 2019 drama nominees are back in the hunt — “Better Call Saul,” “Homecoming,” “Killing Eve,” “Pose” and “This is Us” — plus returning shows that skipped the last eligibility period like “Westworld,” “Stranger Things,” “The Handmaid’s Tale” and “The Crown,” so that contest could be killer. The good news is that, like the Emmys, we’re expanding the top categories from seven nomination slots to eight.

Truly, every category could be unpredictable in this era of peak TV. Anything could happen with enough of a groundswell of support from our users. You can join that user base and cast your vote by signing up here if you haven’t already. Check out the complete list of past Gold Derby Award winners for Best Comedy Series and Best Drama Series below, and vote now for this season’s best.

1) Click “Make your predix here!” at the top of the Gold Derby page.