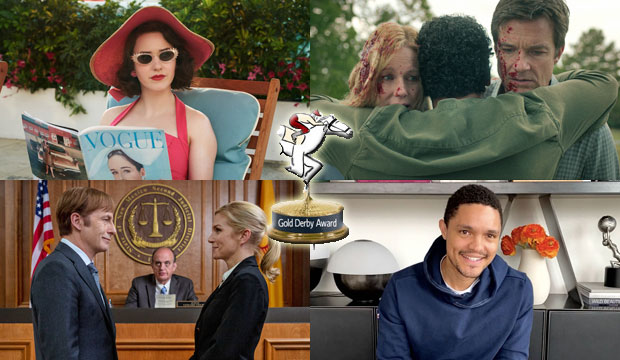 Time is almost up to vote for the winners of the 17th Annual Gold Derby TV Awards. The last day is Friday, September 11, so make your picks here before time runs out. If you have already voted but are having second thoughts, you can edit your ballot as often as you like. No one’s choices are final until the voting period is over.

Over 1,500 users voted for the nominees, and as of this writing about 2,000 have given us their picks for the winners. And there are still a few categories where a dozen or so votes could change the outcome, so every vote counts. Of course, I’m not going to tell you which categories are close, and who the top vote-getters currently are. You’ll have to wait to find out; we’ll let you know which races were the closest when we announce the winners next week.

To refresh your memory, “Succession” led the nominations with 11 bids including Best Drama Series an Ensemble of the Year. The top comedy is “Schitt’s Creek” with nine bids. “Watchmen” is the most nominated movie or limited series with eight. You can check out the complete list of contenders here.

Last year Gold Derby’s readership agreed with the television academy by picking “Game of Thrones” as Best Drama Series, “Fleabag” as Best Comedy and “Chernobyl” as Best Limited Series. But we also deviated from Emmy voters by properly rewarding Maisie Williams for slaying the Night King, giving “Sharp Objects” stars Amy Adams and Patricia Clarkson their due, and yes, we worshiped at the altar of Hot Priest himself, Andrew Scott (nominated again this year for guest-starring on “Black Mirror”).

Will we right any Emmy wrongs this year? Well, that’s up to you. Vote now, or forever hold your peace.