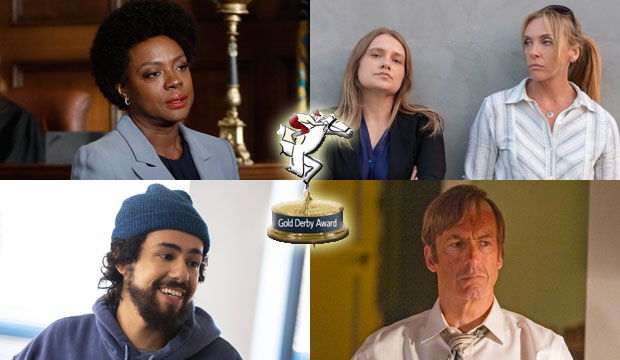 Have you voted for the Gold Derby TV Awards yet? We launched voting on July 7, and as of this writing more than 1,200 of our registered users, who are among the most knowledgeable entertainment fans on the web, have cast their votes. If you still need to fill out your ballot, the last day is Sunday, July 26. And if you already filled it out but want to make changes, feel free; no one’s votes are final until voting closes.

Nominees are decided by preferential ballot. When you vote for your favorites here in our predictions center, your number-one choice gets the most points and so on down the list (more complete details on scoring here). The shows and performers with the most points will be our nominees. We’ll announce the nominations on Thursday, July 30, two days after the Emmy nominations are unveiled so we can set the record straight on what was really the best TV of the 2019-2020 season.

But we’ll be following the Emmys’ lead when it comes to nomination slots. Given the dramatic increase in programming and submissions from year to year, the television academy expanded Best Drama Series and Best Comedy Series to eight nominees, while slots in other categories are determined based on the number of candidates submitted in those races. So we too will have eight Best Drama and Best Comedy nominees, as well as eight slots for drama and comedy supporting performers, barring ties (they would have to be exact numerical ties for us to include additional nominees).

SEEBest Comedy Series Emmy predictions: 8 nominees will be ‘Dead to Me,’ ‘Ramy,’ ‘Insecure’ …

There are a couple of exceptions, though. At the Emmys there will only be five spots for lead performers in movies and limited series, but we’ll keep those fields at six given how competitive they are. And any of our categories that don’t correspond to existing Emmy categories (including Ensemble of the Year, Performer of the Year and Breakthrough Performer of the Year) will have six nominees.

So now you know what to expect, and knowing is half the battle. The other half is voting, so make sure to support your favorite shows and performers before time runs out this weekend.