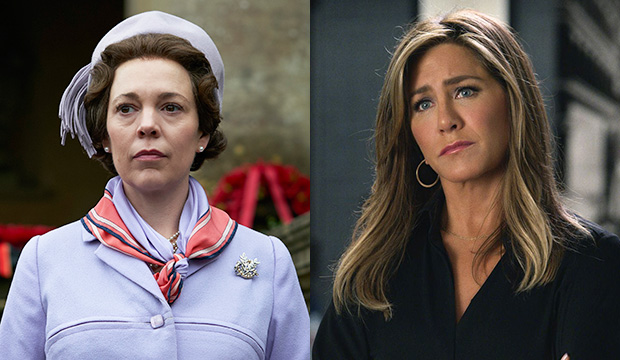 Olivia Colman has never lost a Golden Globe, but that looks like it’s about to change. Per our odds, the queen of “The Crown” will bested by one of our best “Friends,” Jennifer Aniston for “The Morning Show,” for the Best TV Drama Actress honor.

Aniston has a narrow lead at 17/5 to Colman’s 71/20, buoyed by our Experts and Editors, most of whom are predicting the former Best TV Comedy/Musical Actress champ. However, Colman has more support among our users, and our top 24 predictors are nearly split down the middle, with 12 going for Aniston and 11 for Colman; the sole outlier is banking on an upset by Emmy champ Jodie Comer (“Killing Eve”).

Colman is going for a rare 3-for-3 record at the Globes, having first triumphed for her supporting performance on the AMC limited series “The Night Manager” three years ago and last year on the film side for her eventual Oscar-winning turn in “The Favourite” (2018). With four bids, “The Crown” received its most nominations yet this year, but since the Hollywood Foreign Press Association constantly turns over a new leaf — and it already awarded “The Crown” with series and actress prizes for Claire Foy for Season 1 — a third-year show is decrepit by its standards. Still, “The Crown” is not your usual series since it changes its cast every two seasons, so Colman is sorta new.

On the other hand, Aniston is actually on a new series, which snagged three bids, the others being drama series and another actress bid for her co-star Reese Witherspoon. Aniston and Witherspoon are the only nominees from a first-year show, and guess what? The last six winners in this category have hailed from freshman series. (“Empire” star Taraji P. Henson won for Season 1 and the first half of Season 2 since “Empire” was a midseason premiere in January 2015 — it debuted four days before the Globes ceremony — and you know the HFPA hated that it had to wait a whole year to be able to award it.) And while Colman can deliver an off-the-cuff acceptance speech like no other, Aniston wields the kind of star power the Globes adores — not to mention the fact that her ex-hubby Brad Pitt is probably also going to win Sunday night. With her victory for “Friends” 17 years ago, Aniston would be the first person to nab the drama and comedy/musical actress Globes.

In third place in our odds is Comer, followed by Nicole Kidman (“Big Little Lies”) and Witherspoon.