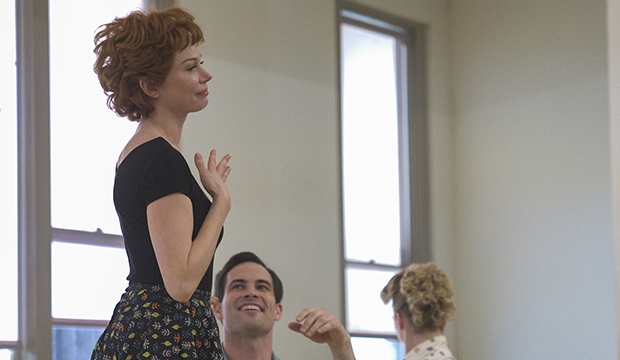 Michelle Williams is about to have a great 2020. The Emmy champ, who’s engaged to and expecting a baby with “Fosse/Verdon” director-producer Thomas Kail, is heavily predicted to go on a killer awards run this month, and it’ll all start with Sunday’s Golden Globes.

With 16/5 odds, the actress is the overwhelming favorite to take home the Best Limited Series/TV Movie Actress prize for “Fosse/Verdon.” And if all goes as expected, she’ll add a Critics’ Choice Award the following week and then the Screen Actors Guild Award the week after that. Since she’s already bagged the Emmy and the Television Critics Association Award for “Fosse/Verdon,” this back-to-back-to-back sweep would make Williams just the second person to win all five major TV awards in a single season. Sarah Paulson first accomplished it three years ago for “The People v. O.J. Simpson: American Crime Story,” completing her sweep in the same order in which Williams would, starting with TCA and ending with SAG.

It might be hard to remember now, but Williams wasn’t even initially predicted to win the Emmy, thanks to Patricia Arquette‘s own domination last winter for “Escape at Dannemora,” which started at the Globes with an upset over Amy Adams (“Sharp Objects”). But as “Fosse/Verdon” aired over the spring, it slowly became clear that Williams’ indelible turn as Gwen Verdon was one for the ages.

A previous winner for “My Week with Marilyn” (2011), Williams does have some formidable competition at the Globes. “Unbelievable,” which netted four bids and will compete at the Emmys this year, landed both Merritt Wever and Kaitlyn Dever in the field; however, the downside is they could cancel each other out. Joey King (“The Act”), whom Williams beat at the Emmys, is the kind of starlet right up the Globes’ alley. And you can never count out Helen Mirren in an ornate period piece like “Catherine the Great”; she’d set the solo record in the category with three wins.

Wever is second in our odds, followed by Mirren, Dever and King.