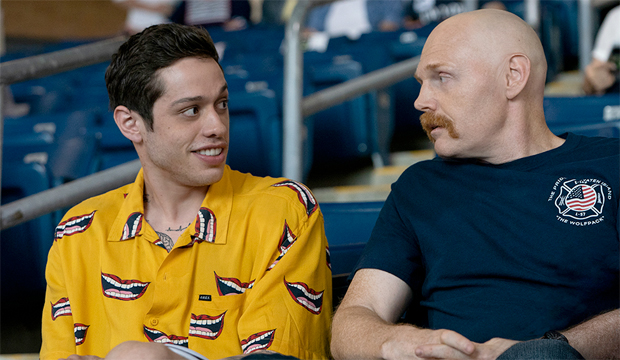 So don’t be too surprised if he scores his first-ever Golden Globe nomination when the Hollywood Foreign Press Association announces its nominations on Feb. 3, which would set him up for a run at the Oscars.

“The King of Staten Island” is acclaimed producer/writer/director Judd Apatow‘s latest gem, which he co-wrote with Dave Sirus and leading man Pete Davidson (“Saturday Night Live”). It’s a semi-autobiographical tale based on Davidson’s life, in which Scott, a troubled 24 year-old slacker and dropout must come to terms with the death of his firefighter father when he was a child, and an unexpected romance between his widow mom Margie (Oscar winner Marisa Tomei) and straight-shooter divorced fireman Ray (Burr).

Like many films this year, “The King of Staten Island” missed out on its intended theatrical release due to the ongoing coronavirus pandemic. It launched digitally in June and has since become one of the most successful films of the year for Universal Pictures, debuting at number one across various streaming platforms. Reviews have been favorable, scoring a 67 at Metacritic and certified “fresh” at Rotten Tomatoes with 74% approval. Burr has been singled out by critics, with Justin Chang (Los Angeles Times) calling him “sensational,” Mick LaSalle (San Francisco Chronicle) praising his “pitch-perfect” performance and Richard Roeper (Chicago Sun-Times) applauding Burr for his “strong dramatic/comedic turn.”

It can be a tough road to Globes glory in the catch-all supporting categories because they are often more competitive than the lead acting categories, which are split between dramas and comedies/musicals. While the Best Supporting Actor race is crowded this year, many of the top contenders aren’t necessarily shoo-ins at this stage of the race, like frontrunners Sacha Baron Cohen and Mark Rylance (“The Trial of the Chicago 7”), Bill Murray (“On the Rocks”) and Leslie Odom Jr. (“One Night in Miami”). So there’s still a good chance that less-known surprise contenders like Paul Raci (“Sound of Metal”) and Burr might crash the party.

SEE Will ‘The King of Staten Island’ bring producer Judd Apatow back to Golden Globes after ‘The Big Sick’ snub?

Going against him might be that he’s best known for his stand-up comedy. The Globes have a mixed history with stand-up comics, particularly in the film categories. Stars like Ricky Gervais, Aziz Ansari, Louis C.K., and a bunch of “Saturday Night Live” and “Second City” alums have scored at the Globes over the years. But these have been on the TV side, which perhaps doesn’t suffer so much from the snobbery associated with performers working in films, where it’s rare to see a stand-up comic reap an award for acting. Over the last ten years, only two examples come to mind – Eddie Murphy (nominated last year for “Dolemite Is My Name”) and Mo’Nique, who first gained recognition for her work in stand-up comedy and who won “Best Supporting Actress” in 2009 for “Precious: Based on the Novel ‘Push’ by Sapphire.” Fingers crossed that Burr can add to that relatively short list and sneak in to the Best Supporting Actor race.