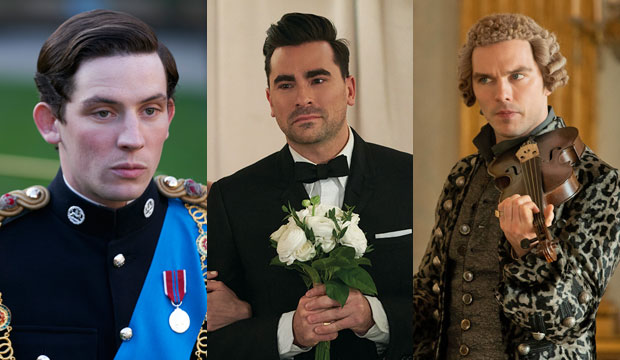 Since “Schitt’s Creek” made history at the Emmys with its clean sweep, we’re expecting it to do well at the upcoming Golden Globes as well, including a victory for supporting actor (and series co-creator) Dan Levy. That’s according to the combined predictions of more than 1,700 Gold Derby users as of this writing. But it’s possible that he’ll have to bend the knee to a couple of royal rivals instead.

Levy is currently in the lead with 39/10 odds, including support from four of the Expert journalists we’ve surveyed, three Gold Derby Editors who cover awards year-round, 14 of the Top 24 Users who got the highest scores predicting last year’s Globe nominations, and 13 of our All-Star Top 24 who had the best prediction scores when you combine the last two years’ results.

Even though “Schitt’s” has never been nominated at the Globes before, voters sometimes can’t resist a farewell coronation. They didn’t give “Breaking Bad” the time of day until giving it Best Drama Series for its final season. Ditto “The Americans,” which won Best Drama for its swan song. And “Fleabag” won Best Comedy Series following its Emmy windfall for its second and last season.

However, the international journalists who make up the Hollywood Foreign Press Association that decides these awards might be drawn to a couple of actors playing real-life international royals. Josh O’Connor plays Prince Charles in “The Crown,” and he’s backed by one of our Top 24 and four of our All-Stars. He wasn’t nominated last year when he was eligible, but the current season up for consideration covers Charles’s marriage to Princess Diana, raising his profile in this contest.

He’s not the only world leader in the running. Nicholas Hoult plays Emperor Peter III in “The Great.” He was snubbed by the Emmys where he was eligible earlier this year, but the Globes might be more fond of such an upscale, offbeat production about European history. Indeed, most of our Editors think he’ll win, as do six of our Top 24 and six All-Stars.

There’s even a chance a wannabe king will prevail. Brendan Gleeson is a dark horse contender for playing Donald Trump in “The Comey Rule,” with a couple of Editors and one of our Top 24 currently betting on him to triumph. Perhaps the HFPA will rule in his favor where Trump has failed in his attempts to overthrow the presidential election results in the courts. This may be the one popular vote he could win.