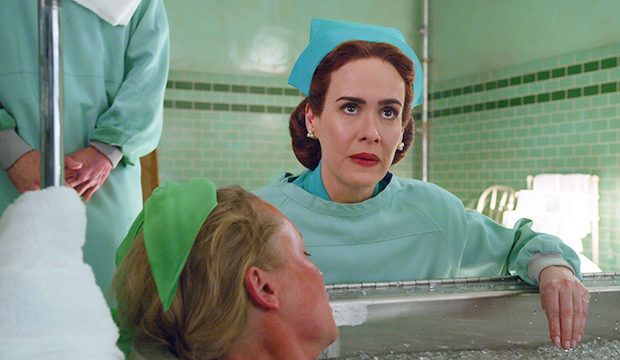 If anyone knows a thing or two about bagging Golden Globe Award nominations, it’s Ryan Murphy, who has produced a total of 14 program bids and five victories for 11 different TV projects thus far. Now, he’s looking at another potential successful run with five shows eligible at next year’s ceremony, including his newest Netflix series “Ratched,” the eight-episode inaugural season of which was released September 18 on Netflix. Will it be Murphy’s fourth show to make the cut for Best Drama Series?

The three shows that precede it are “Nip/Tuck” (2004-05), which won on its second try; “American Horror Story” (2012), which was still billed as a drama series for its debut installment, “Murder House,” before officially turning into an anthology series and shifting over to limited for its succeeding outings; and “Pose” (2019). “9-1-1” and its spin-off series “9-1-1: Lone Star” are Murphy’s two other dramas in contention at the upcoming awards — the former for its third season; the latter for its first. But given that “9-1-1” has never been shortlisted, it’s unlikely that it nor its offshoot would siphon too many votes from “Ratched,” which falls more in line with what the Hollywood Foreign Press Association generally gravitates toward.

More so than serving as an undeviating prequel to Ken Kesey‘s 1962 novel “One Flew Over the Cuckoo’s Nest,” the series tells the unascertained backstory of one of its main characters, Mildred Ratched (Sarah Paulson), a nurse who is hired to work at a leading psychiatric hospital in Northern California. She, however, isn’t primarily there to partake in the new uncustomary experiments on the human mind led by Dr. Hanover (Jon Jon Briones), but rather to break out her foster brother Edmund (Finn Wittrock), who is admitted to the hospital after killing several priests.

With its lavish set and costume designs, snappy dialogue and set of outlandish characters, “Ratched” is quintessential Murphy and thus tailor-made for Globes success. Sprinkled on top of the show’s escapist, thrilling qualities, however, is a deeper look into a number of hefty subject matters, including (internalized) homophobia in the 1940s and mental illness, and a psychological investigation of its characters’ moral ambiguity, most considerably Mildred’s. The show explores themes and evokes tones found in many of Murphy’s other Globe-winning projects, the latter of which are rounded out by two-time Best Comedy Series champ “Glee” (2010-11) and “American Crime Story’s” two installments, “The People vs. O.J. Simpson” and “The Assassination of Gianni Versace,” which won the limited series prizes in 2017 and ’19, respectively.

The shows that top off Murphy’s current pool of TV contenders are two other Netflix series, limited series “Hollywood” and comedy “The Politican.” According to our combined odds, where it sits in seventh place, “Ratched” is the best positioned of the three to snag a program nomination; “Hollywood” and “The Politician” are in 10th and 12th places in their respective categories. This isn’t surprising since “The Politician” was already acknowledged with comedy series and lead actor (for Ben Platt) Globe bids earlier this year, while “Hollywood” is fresh off 12 Emmy noms and two victories. With “Ratched,” the HFPA has the opportunity to do what it loves most: be the maiden group to throw its weight behind a shiny new project. That being said, it wouldn’t be the first time they shortlisted more than one of Murphy’s series, as both “Murder House” and “Glee” bagged program noms in 2012.

The likelihood of Murphy being shut out across all three program categories is presumably small since it last happened way back in 2013, when “American Horror Story: Asylum,” “Glee” and “The New Normal” were eligible. But bear in mind that HFPA members tend to favor the newest kids on the block, and at that point, both “American Horror Story” and “Glee” had already been recognized by them. Plus, the Murphy-verse wasn’t completely passed over since “Asylum’s” leading lady Jessica Lange still landed a Best Limited Series/TV Movie Actress citation.

For what it’s worth, they can also recognize him twice for his film work with “The Boys in the Band” and “The Prom,” the latter of which he also directed. If he were to snag a nomination for either one or both of them, it would be the first time he is recognized on the film side (as 2014’s “The Normal Heart” was a telefilm).