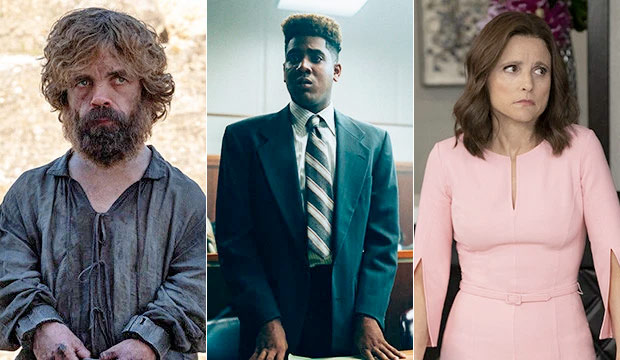 When the winners of the 77th Golden Globe Awards are announced on Sunday, January 5, don’t look for Peter Dinklage (“Game of Thrones”), Jharrel Jerome (“When They See Us”) or Julia Louis-Dreyfus (“Veep”) to hear their names called, as they were cruelly skunked this year. Indeed, the Hollywood Foreign Press Association snubbed these three worthy TV contenders when the nominations were announced in early December, but they weren’t the only ones left off the list. Scroll down for an unfortunate reminder of the 25 biggest Golden Globes television snubs.

The HFPA always had an on-again/off-again relationship with “Game of Thrones,” and that’s never been more evident than this year when they snubbed it for Best Drama Series and Dinklage for Best TV Supporting Actor. HBO’s fantasy epic received only a single nomination for its final season, for lead actor Kit Harington, who’s now predicted to lose to Brian Cox (“Succession”). Alas, “GoT” will have to make due with its record-breaking 59 Emmy Awards and its sole Golden Globe victory for Dinklage back in the first season.

Many awards watchers continue to be stunned over the across-the-board omissions for “When They See Us,” Netflix’s limited series detailing the Central Park Five story. Lead performers Jerome (whose Emmy victory for Best Limited Series Actor was one of our top awards moments of the year) and Niecy Nash were ignored for their true-to-life depictions, as was the rest of the entire ensemble cast.

And what about Louis-Dreyfus being skunked for “Veep”? The beloved actress recently said goodbye to Vice President Selina Meyer after surviving a personal battle with cancer, so for the HFPA to ignore her this year seems especially cruel. After all, JLD won a combined nine Emmys for “Veep” (six for acting, three for producing) and not a single Golden Globe.

The 2020 Golden Globe winners in both television and film will be revealed Sunday night in a ceremony hosted once again by Ricky Gervais. Here are the Top 25 TV snubs, based on the combined predictions of Gold Derby’s Experts, Editors, Top 24 Users, All-Star Users and all Users: