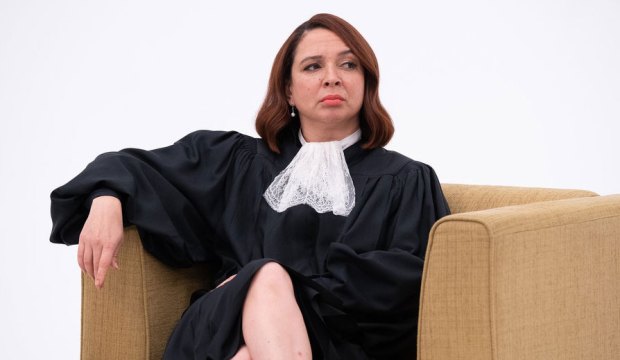 “The Good Place” ended its four-season run this spring, but despite the consistent adulation of critics it hasn’t won an Emmy yet. That could change this year, though. We recently opened our predictions for Best Comedy Guest Actress, and the early front-runner to win is Maya Rudolph. It would be the first win of Rudolph’s career despite three previous nominations in this category.

Rudolph was a regular cast member on “Saturday Night Live” from 2000 to 2007, but she was never nominated for an Emmy while she was a regular. She finally got her first bid in 2012 for returning to the show as a guest host, but she lost Best Comedy Guest Actress to Kathy Bates (“Two and a Half Men”).

Then she was nominated again in 2018 when she joined “The Good Place” in a recurring role as Judge Gen, who decides on matters in the afterlife. That was the first time “The Good Place” was nominated for any Emmys, and it was just her and Best Comedy Actor nominee Ted Danson. But this time Rudolph lost to Tiffany Haddish for guest hosting Rudolph’s alma mater “SNL.”

And Rudolph was nominated again in 2019, the year “The Good Place” finally broke into the race for Best Comedy Series, but that time Emmy voters went with Jane Lynch for “The Marvelous Mrs. Maisel” — that was Lynch’s fifth Emmy in just 10 years. The good news for Rudolph, though, is that Lynch appeared in too many episodes in “Maisel” season three, so she’ll be competing as a supporting actress instead of as a guest.

If Rudolph is nominated in this category for a fourth time this year, she’ll tie Eileen Heckart and Laurie Metcalf as the seventh most nominated individual in this category (Cloris Leachman holds the record with eight bids). And right now we think she’ll win, giving her leading odds of 39/10 based on the combined predictions of Gold Derby users.