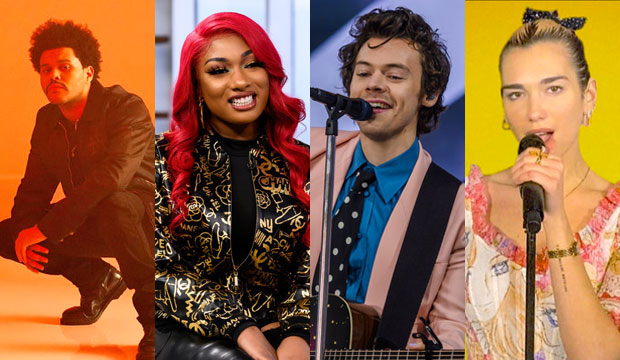 We recently opened our 2021 Grammy predictions for Record of the Year, and hundreds of our users have already given us their early forecasts. Those predictions have been combined to generate our official racetrack odds, which are always changing as more people make and update their forecasts. So who are the early favorites?

As of this writing, The Weeknd leads the way with 7/1 odds for his chart-topping hit “Blinding Lights.” He was nominated in that category once before, for “Can’t Feel My Face” in 2016, but he lost to “Uptown Funk” by Mark Ronson and Bruno Mars. He also happens to lead the way in our current odds for Song of the Year (also for “Blinding Lights”) and also Album of the Year (“After Hours”).

He’s followed by another chart-topper, Post Malone‘s “Circles” with 19/2 odds. In addition to hitting ruling the Billboard Hot 100 singles chart, “Circles” also broke the record for the most weeks ever spent by a song in the top 10. This would actually be his third Record of the Year nom in a row, following “Rockstar” in 2019 and “Sunflower” in 2020. But he hasn’t won in any category yet.

Dua Lipa is undefeated at the Grammys after winning her two bids in 2019 (including Best New Artist). Now she ranks third in our Record of the Year predictions with 10/1 odds for “Don’t Start Now,” which reached the top five to become her highest-charting hit to date.

Two big hip-hop hits are next in line. Roddy Ricch spent 11 weeks at number-one with “The Box,” which we place at number-four with 14/1 odds. No other song this year has led the charts for that long. Megan Thee Stallion is fifth with 14/1 odds for “Stallion,” which shot to number-one thanks to the remix version she recorded with Beyonce. She could submit either version for consideration, but the remix might be the safer bet.

SEERun The Jewels’ ‘RTJ4’ is one of 2020’s most acclaimed and timely albums: Could it make a run at the Grammys?

Lady Gaga has accumulated 11 Grammys and two past nominations for Record of the Year (“Poker Face” in 2010 and “Shallow” in 2019). We think she’ll get another crack at it as we rank her sixth with 20/1 odds for “Rain on Me,” her collaboration with Ariana Grande, which debuted at number-one on the Billboard charts.

As you can see from the above predicted songs, success sells at the Grammys, with the biggest hits often rising to the top. That bias also benefits Doja Cat‘s “Say So,” which ranks seventh with 25/1 odds. Like Megan Thee Stallion’s “Savage,” she also rose to number-one with an assist from a remix: she teamed with Nicki Minaj for an alternate version of this song.

SEEFans say Harry Styles is the One Direction member with the best chance to win a Grammy in 2021, and it’s not even close [POLL RESULTS]

Rounding out our top eight, also with 25/1 odds, is Harry Styles‘s “Adore You.” He has never been nominated for a Grammy before, even with his former boy band One Direction, and “Adore You” is the lowest-charting song in our top eight (its peak as of this writing was number-six), but it’s the kind of well-received love ballad that often appeals to Grammy voters; consider recent winners like Kings of Leon‘s “Use Somebody” (2010), Lady A‘s “Need You Now” (2011), Sam Smith‘s “Stay with Me” (2015) and Adele‘s “Hello” (2017) to name a few.

Do you agree with our current odds? There are still two months left in the Grammy eligibility period, which ends on August 31, so there’s time for other songs to enter the race and rise to the top, so these picks are hardly set in stone.