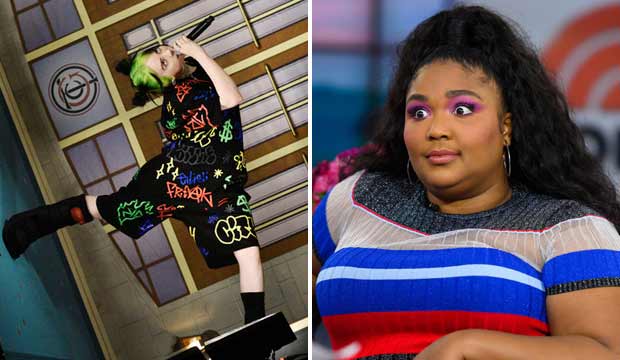 The Grammys have announced their first round of performers for their 2020 telecast: Billie Eilish, Lizzo, Aerosmith, and a first-time Grammy duet between “The Voice” coaches and real-life couple Gwen Stefani and Blake Shelton.

Eilish is taking the Grammy stage for the first time in her career to celebrate the first six nominations of her career, including Album of the Year (“When We All Fall Asleep, Where Do We Go?”) and Best New Artist.

Lizzo is also a Grammys newcomer, and she’s actually the most nominated artist of the year with eight bids, also including Album of the Year (“Cuz I Love You”) and Best New Artist. She and Eilish both swept the top four general field categories, actually, which makes this the first time that two artists have gotten all four noms in the same year.

The legendary rock band Aerosmith is being honored collectively as the MusiCares Person of the Year for their philanthropic efforts over the course of their career. They’re also four-time Grammy winners, all in the Best Rock Duo/Group Performance category for some of their best known hits: “Janie’s Got a Gun” (1991), “Livin’ on the Edge” (1994), “Crazy” (1995) and “Pink” (1999).

Stefani is a three-time Grammy champ: twice with the band No Doubt for their songs “Hey Baby” (2003) and “Underneath it All” (2004), and once for collaborating with Eve on the song “Let Me Blow Ya Mind” (2002). But her partner Shelton hasn’t won a Grammy yet despite seven previous nominations. He contends for the eighth time this year: Best Country Solo Performance for “God’s Country.”

Whose performances are you looking forward to the most when Alicia Keys hosts the ceremony for the second year in a row on Sunday, January 26?