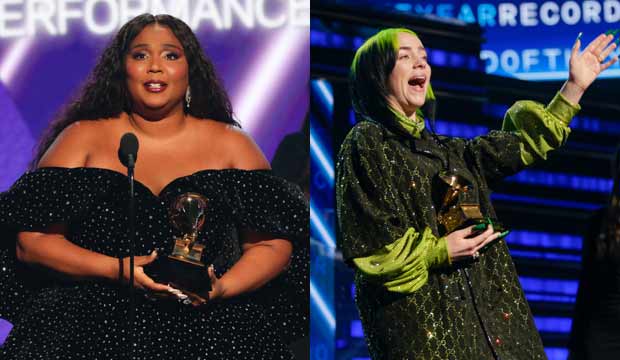 The Grammys are often full of surprises, but while many of this year’s results were historic, Gold Derby’s racetrack odds correctly predicted 25 out of 32 categories we bet on, for an accuracy rate of 78%. That’s a big improvement over last year, when we were right about 65% of categories. But despite that strong accuracy rate, there were still seven upsets. Scroll down to see which those were, and check out the complete list of winners here.

One shocker came at the very end of the night when Billie Eilish completed her sweep of the general field categories. We thought she would win most of her six nominations, but we predicted that the recording academy would go with Lil Nas X and Billy Ray Cyrus‘s “Old Town Road” for Record of the Year. Nope. Eilish won that too for “Bad Guy.”

Ironically, another category we got wrong was one where we thought Eilish would win, but didn’t. She was the front-runner for Best Pop Solo Performance (also for “Bad Guy”), but it was Lizzo who took that prize for “Truth Hurts.” It’s interesting that she was able to overtake Eilish there, but couldn’t for Record or Song of the Year. Perhaps Lizzo and Lil Nas X split the hip-hop vote in the top races, dividing the field enough for Eilish to secure her wins.

We also didn’t see Elvis Costello coming. He won Best Traditional Pop Album over Michael Buble and Barbra Streisand. Somehow, this was only the second Grammy ever won by the legendary Costello. Meanwhile, Anderson Paak and PJ Morton both upset H.E.R. in the R&B field, resulting in a complete shutout for the breakout singer-songwriter. Did these results surprise you like they surprised many of us?