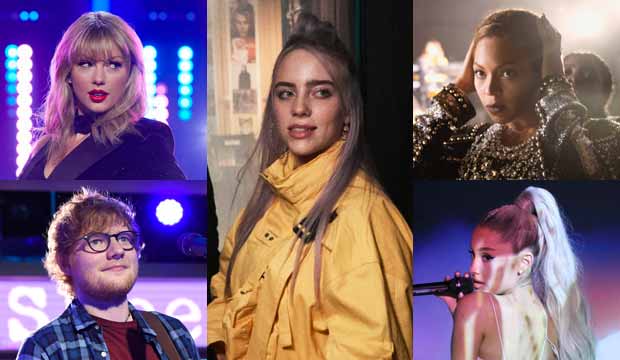 Billie Eilish (“When We All Fall Asleep, Where Do We Go?”) is the front-runner to win Best Pop Album at the Grammys, according to the combined predictions of Gold Derby’s users. But is it a done deal? She’s up against arguably the biggest names in contemporary pop music: Ariana Grande (“Thank U, Next“), Taylor Swift (“Lover“), Beyonce (“The Lion King: The Gift”) and Ed Sheeran (“No. 6 Collaborations Project“).

On paper, that seems like a steep hill for Eilish to climb since Grande, Swift, and Sheeran have all won this category in just the last four years and Beyonce has won … well, just about everything else. She is a 23-time Grammy winner after all. The good news for Eilish, though, is that she might actually be the big fish in a small pond this year. She’s the most nominated artist in this category with six bids. And she is the only artist here who is also nominated across all four general field categories (Album, Record and Song of the Year, plus Best New Artist).

So it’s no wonder why she’s back by most of the Editors who cover awards year-round for Gold Derby and most of the Top 24 Users who got the highest scores predicting last year’s Grammy winners. She’s also the front-runner according to most Expert journalists and the All-Star Top 24 who have been the most consistent picking Grammy winners over the last couple of years. Overall, Eilish gets leading odds of 82/25.

If there is an upset, it’s most likely to come from the defending champ, Grande, who claimed this prize for “Sweetener” last year and is back again with “Thank U, Next.” She ranks second with 39/10 odds in no small part because she also has an Album of the Year nomination. She managed to win this award 12 months ago even when she wasn’t nominated at all in the general field, so don’t count her out here.

Don’t count out Swift or Sheeran. Neither was nominated for Album of the Year, but Sheeran still won this award for “Divide” in 2018 when he was snubbed in the top race, and Swift won it for “1989” in 2016 in addition to her two Album of the Year victories, so we know she’s popular within the recording academy. And the title track from “Lover” scored her a nom for Song of the Year, so we know her current work is popular with the recording academy too.

And then there’s Beyonce, who has more Grammys than the other artists in this category combined. She’s usually a stronger force in R&B categories, but her four nominations this year, including two for her “Lion King” original song “Spirit,” continue to demonstrate, as always, that she’s not one to be trifled with. Nevertheless, it might be tough for her to get past the teenager who’s literally younger than Destiny’s Child.