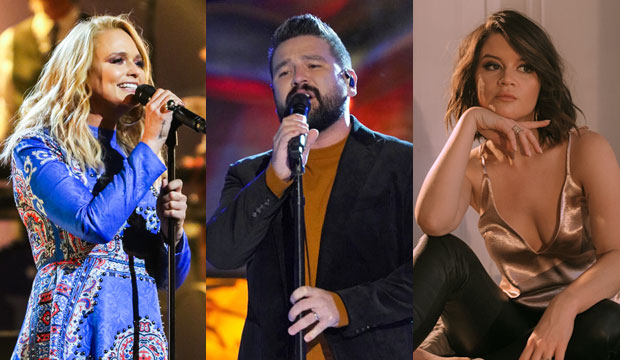 We thought Luke Combs, The Chicks and The Highwomen would be among top contenders to win 2021 Grammys in the country field, but the recording academy thought differently. The Highwomen only received one nomination, while Combs and The Chicks were shut out entirely. So who will capitalize on their absences? Let’s break down the four categories.

This category is a little tricky. At first glance, the obvious winner would be “Bluebird” by Miranda Lambert. It’s by far the biggest hit nominated, Lambert is a past Grammy winner and respected in the industry, and the song also got a Best Country Song nomination. However, looking at past category winners, the biggest hit doesn’t really win that often (in fact, it hasn’t since 2015). More often, this category goes to passion picks, like Kacey Musgraves’s “Butterfly” or Willie Nelson’s “Ride Me Back Home” last year. Not only that, but Grammy country voters seem to be moving towards more traditional country music.

That’s why a win could come for Vince Gill’s powerful “When My Amy Prays,” which is inspired by his relationship with his wife Amy Grant and their different viewpoints on religion. Gill is also beloved by the Grammys, being one of the most awarded country artists in history with 21 wins to date.

Another powerful song that could surprise is Mickey Guyton’s “Black Like Me,” which touches on race in an impactful way. Guyton made history at this year’s ACMs for being the first Black woman to perform solo, and the underrepresentation of artists of color in the country industry has been a subject of discussion in recent years.

Finally, Eric Church’s “Stick That In Your Country Song” also touches on some heavy issues like veterans and social inequality, and he’s still not a Grammy winner, so I wouldn’t rule him out either if voters feel he’s overdue.

Will Win: Vince Gill’s “When My Amy Prays” or Miranda Lambert’s “Bluebird”
Dark Horse: Mickey Guyton’s “Black Like Me”

This category is probably one of the most locked of the night. It’ll be a big surprise if Dan and Shay and Justin Bieber’s “10,000 Hours” doesn’t win here. Not only does it blow the competition out of the water commercially (it was a top-10 crossover hit on the Billboard Hot 100), but Dan and Shay have won this category for the past two years, and Bieber heavily over-performed in nominations (four bids) relative to our expectations. A third victory here would tie Dan and shay with Little Big Town for the most wins in this category since it was combined with Best Country Collaboration in 2012. The song also won two American Music Awards, and was nominated for two CMAs.

If I had to bet on a dark horse to win here, it’d be “All Night” by Brothers Osborne. The song peaked the highest on the country charts out of the other nominees (number-25 on Billboard’s Hot Country Songs chart), and this is Brothers Osborne’s sixth consecutive nomination without a win in this category, so perhaps voters might want to finally honor them.

There’s also Old Dominion, who did get a Best Country Song nom. However, “Some People Do” wasn’t a major hit, and that might hurt them. Lady A and Little Big Town are also nominated and highly respected, having both won Best Country Duo/Group before, so they could always surprise too.

Out of the country categories, this perhaps is the most competitive. Maren Morris’s “The Bones” is obviously the biggest hit here, but voters do have some hesitation when awarding such pop-influenced songs. They often go for more traditional country compositions.

However, “The Bones” might just be too big to snub, and Morris is liked by voters, nominated in at least one category every year for the last five years in a row, including a surprise bid in 2019 for an Elton John cover, “Mona Lisas and Mad Hatters.” And she already has a Grammy under her belt (Best Country Solo Performance for her breakthrough hit “My Church” in 2017) while beating strong contenders. That said, the country panel hasn’t been that kind to her for the past two years.

If voters are looking for a more old-school country song, then Miranda Lambert’s “Bluebird” fits the bill perfectly, also being a smash hit, by an also-respected Grammy winner. And it’s also up for Best Country Solo Performance, while “The Bones” isn’t.

And you can never count out recent Grammy favorite Brandi Carlile and her supergroup The Highwomen — which includes Maren Morris, although this win wouldn’t go to her since she isn’t a credited writer of their nominated song, “Crowded Table.” It’s also co-written by Grammy favorite Lori McKenna and has Americana appeal in addition to country appeal. So watch out for this song to surprise come January.

Miranda Lambert should thank her lucky stars that favorites Luke Combs and The Highwomen both got (shockingly) snubbed. Her “Wildcard” is by far the most successful album in this field, and she’s a country favorite, having won this category before with “Platinum.” Her biggest competition will likely be Ashley McBryde (“Never Will”), who seems to be an in-demand commodity at country award shows, and whose album (along with Lambert’s) was nominated at the CMAs for Album of the Year.

The nomination may be the reward for the other three contenders (Brandy Clark‘s “Your Life is a Record,” Ingrid Andress‘s “Lady Like” and Little Big Town‘s “Nightfall”), but wouldn’t it be refreshing for voters to award a young breakout singer-songwriter like Andress? Think about it, Grammys.