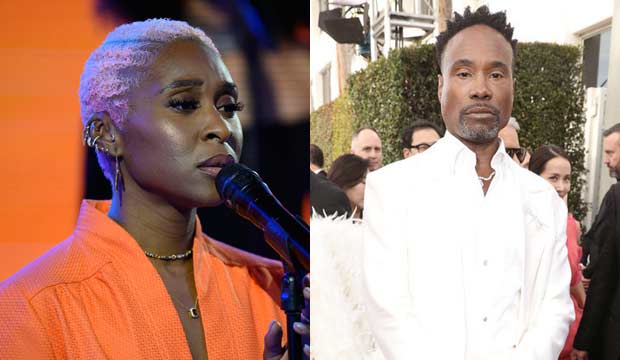 Gaffigan and Noah are both nominees for Best Comedy Album this year for their respective albums “Quality Time” and “Son of Patricia,” though neither has won before.

Erivo previously claimed Best Musical Theater Album for “The Color Purple,” the Broadway show that also won her a Tony and an Emmy. She’s currently nominated for two Oscars for acting and songwriting for the biopic “Harriet,” and if she wins one or both awards she’ll become the youngest ever EGOT recipient at age 33.

Porter is also an Oscar away from EGOT. He won his Grammy for the “Kinky Boots” cast recording, and he won his Tony for his performance in that Broadway show. Most recently he won an Emmy for his leading role in the drama series “Pose.”

DuVernay is best known for her work as a filmmaker, for which she has won Emmys and been nominated for an Oscar. Her Grammy nom came for producing the compilation soundtrack for her Martin Luther King docudrama “Selma.”

Among the Grammy winning musicians making appearances, Wonder is truly a wonder with three Album of the Year wins (which ties him with Frank Sinatra and Paul Simon as the most awarded performer in that category). He has won 25 trophies overall, which makes him the fifth biggest winner of all time. And on the opposite end of the career spectrum, Dua Lipa just took home Best New Artist last year.

Who are you most excited to see on Sunday night, January 26, during the telecast hosted by Alicia Keys?