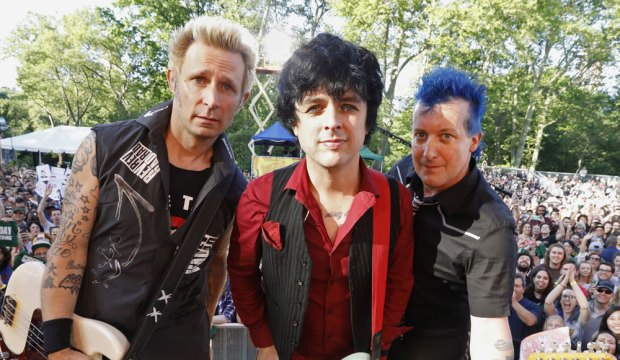 The veteran punk band Green Day dropped their 13th album “Father of All Motherf*ckers” (or “Father of All…” for the faint of heart) on February 7. Given how much critical and commercial success they received for commenting on the George W. Bush era with “American Idiot” (2004), you might think the title of this collection is a reference to a certain reality host-turned-political figure, but you’d be wrong. So what do critics think of this “startlingly apolitical” effort?

“Father of All” is actually a rather short album with 10 tracks spanning just 26 minutes, and it’s “more concerned with youthful angst and romance” than in dissecting our political climate. It’s “the most convincingly carefree” album they’ve released in the 21st century so far, full of “panache” and “refreshingly … unburdened by legacy or accrued stature” after their decades in the business. But while it achieves “raw, frenzied energy” and “instant gratification,” it “can’t help but burn fast.” Some of its hooks “begin to grate after just a few spins” and it lacks “experimentation and interest.”

Green Day have won 4 Grammys out of 17 nominations over the course of their career, including Best Rock Album for “American Idiot” and “21st Century Breakdown” and Record of the Year for “Boulevard of Broken Dreams.” But they haven’t been nominated since 2014, when they were up for Best Music Film for “Cuatro.” Will “Father of All” bring them back? Check out some of the reviews below, and join the discussion on this and more with your fellow music fans here in our forums.

Phil Mongredien (The Observer): “Their 13th album is startlingly apolitical, more concerned with youthful angst and romance — or, as frontman Billie Joe Armstrong has said, ‘the lifestyle of not giving a f*ck’ … But Green Day deliver everything with such panache that the songs’ limitations don’t really matter, especially when they manage to make tired old tropes seem fresh, as on the swooning brilliance of ‘Take the Money and Crawl’ and ‘Meet Me on the Roof.'”

Jon Dolan (Rolling Stone): “The band heard on ‘Father of All Motherf*ckers’ … sounds refreshingly, almost ‘Kerplunk’-ishly, unburdened by legacy or accrued stature. While the album’s title might reasonably describe the current occupant of the White House, Billie Joe Armstrong recently told Rolling Stone that the band specifically set out not to waste their time on a bunch of songs about Trump.”

Evan Rytlewski (Pitchfork): “The pop-punk stalwarts resist political commentary in lieu of making the most convincingly carefree Green Day record of the new millennium … It’s a genuine blast hearing Green Day lock-in with music this peppy and spirited, at least for a little while. The album aims for instant gratification and achieves it so efficiently that it can’t help but burn fast … its most eager hooks can begin to grate after just a few spins.”

Elisa Bray (The Independent): “There is no denying that ‘Father of All…’ has a raw, frenzied energy, but its onslaught of straight rhythm-chord bashing and hand claps is at the cost of experimentation and interest. ‘Stab You in the Heart’ is straight out of the 1950s’ 12-bar-blues songbook … Zipping along in a mere 26 minutes, ‘Father of All…’ feels like a rush, but not of the adrenaline kind.”