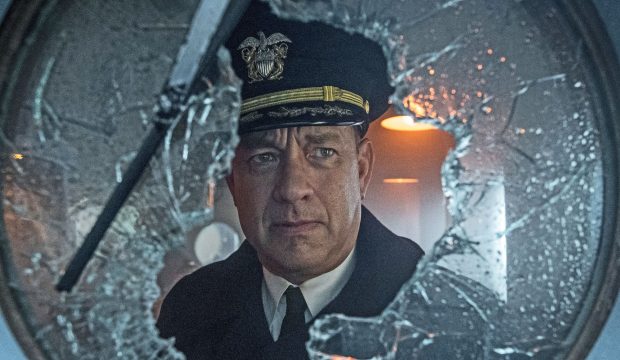 With movie theaters still shuttered as a result of the ongoing coronavirus pandemic, the World War II thriller “Greyhound” starring Tom Hanks made its debut on Apple TV+ on July 10, instead of on the big screen where it was initially intended to be released by Sony Pictures on June 12. But does the economical, 91-minute nautical drama (80 minutes if you don’t count the end credits) play well to critics regardless of the size of screen?

As of this writing the film has received generally positive reviews with a MetaCritic score of 62 based on 31 reviews counted thus far: 21 positive, nine somewhat mixed, and only one outright negative. On Rotten Tomatoes, which classifies reviews simply as positive or negative, the film is rated 77% fresh based on 109 reviews, only 25 of which give it a thumbs down. The RT critics’ consensus summarizes the reviews by saying, “‘Greyhound’s’ characters aren’t as robust as its action sequences, but this fast-paced World War II thriller benefits from its efficiently economical approach.”

Earlier this year, two-time Oscar winner Hanks (“Philadelphia,” “Forrest Gump”) earned his first nomination in almost two decades for playing Fred Rogers in “A Beautiful Day in the Neighborhood,” and critics say he gives a “finely etched,” “nearly minimalist” performance in this film as Captain Krause. The movie “maps its course by Hanks’s steady hand,” but he’s not only the lead actor, he’s also the writer.

This is only his third feature writing credit, following “That Thing You Do!” (1996) and “Larry Crowne” (2011). Here he has penned a “traditionalist” war movie that will be “catnip” to “a certain subset of dads,” but also “manages to make something gripping out of staggering numbers and distances involved in combat at sea.” So are you excited for Hanks no matter what screen he’s on? Check out some of the reviews below, and join the discussion on this and more here with your fellow movie fans.

Leah Greenblatt (Entertainment Weekly): “For a certain subset of dads — drunk on ‘Dunkirk,’ still high on ‘1917’ — ‘Greyhound’ will no doubt be catnip, Hanks himself after all being Dad über alles. Even more explicitly than those recent films, the movie comes bathed in Greatest Generation sheen … The movie maps its course by Hanks’ steady hand: A ship moving swiftly and with sure purpose — compelled by death and danger, but safe in the certainty of history.”

Ignatiy Vishnevetsky (The A.V. Club): “If ‘Greyhound’ isn’t a stylistic achievement on the level of ‘Dunkirk,’ it at least manages to make something gripping out of staggering numbers and distances involved in combat at sea … At its best, ‘Greyhound’ is about the non-metaphors of war: torpedoes, the terror of friendly fire, the complexities of steering a destroyer, messages, orders. Throughout these are seconds of hesitation in which we see something human. “

Owen Gleiberman (Variety): “‘Greyhound,’ a battle drama that’s only 80 minutes long if you don’t count the credits, turns war itself into the main character. The picture takes us through an experience, with a quota of spectacle but no gratuitous ‘explosive’ razzmatazz, and it’s grounded in Hanks’s finely etched but nearly minimalist performance.”

Peter Bradshaw (Guardian): “‘Greyhound’ is a very traditional and indeed traditionalist movie, with Hanks beginning and ending his first day in battle kneeling in prayer. Yet the action itself sticks largely and somehow expressionistically to the tense, claustrophobic world of the bridge with the captain barking all manner of opaque naval jargon. In some ways it resembles a kind of ocean-going stage play.”