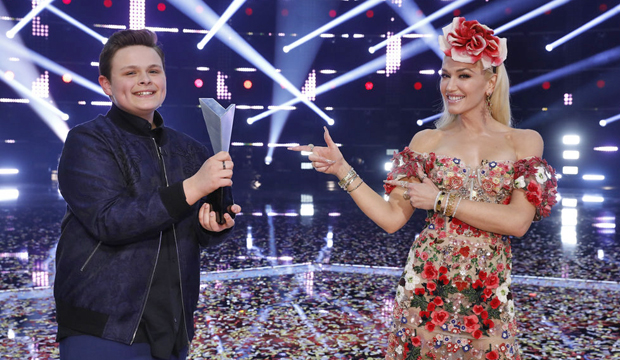 Gwen Stefani had a bananas 2020. Not only did she get engaged to her co-star/best friend Blake Shelton, but she also dominated the Billboard charts with singles like “Nobody but You,” “Here This Christmas” and “Let Me Reintroduce Myself.” Oh, and she finally won “The Voice” on her fifth try. During Tuesday’s grand finale of Season 19, Gwen’s artist Carter Rubin claimed victory over Jim Ranger & Ian Flanigan of Team Blake, Desz of Team Kelly Clarkson and John Holiday of Team John Legend. (Read our minute-by-minute recap.) At 15 years old, Carter is now the youngest male winner of all time.

Carter was a “Voice” favorite ever since his blind audition of “Before You Go,” where he earned two chair-turns from Gwen and John. He ultimately decided to join Team Gwen, a decision that’s now paid off handsomely. This pop singer from Long Island, New York next performed “Like I’m Gonna Lose You” in the battles and “You Say” in the knockouts.

SEE All 14 ‘The Voice’ coaches ranked worst to best

When he got to the all-important live shows, Carter took on “Hero” in the Top 17 and “Rainbow Connection” from “The Muppet Movie” in the Top 9.  America voted him through each week, meaning he was never in danger of going home via the instant save. In the Top 5 finale performance show, he sang “The Climb” as his cover and “Up From Here” as his original.

Here’s a look back at Gwen’s best placements on “The Voice” for each of the five seasons she coached:

Gwen first joined the show as a coach in Season 7, but none of her artists advanced to the finale. Taylor John Williams came closest by making it to fifth place (remember, back then finales only included the top four artists, unlike the top five that compete today).

The rock star coach returned for her second stint in Season 9 where she ended up placing fourth in the four-person finale thanks to Jeffery Austin.

In Season 12, Gwen again just missed out on the last episode when her remaining artists Brennley Brown and Hunter Plake were both eliminated in the semi-finals.

She took a few years off and then returned in Season 17 (where she was now dating Blake). Gwen’s artist Rose Short advanced to the finale but was cut in fourth place.

Now, thanks to Carter Rubin, Gwen has finally clinched victory in Season 19 on her fifth go-around. Carter was likely helped by two of Blake’s artists, Ian Flanigan and Jim Ranger, splitting the vote in second and third place.