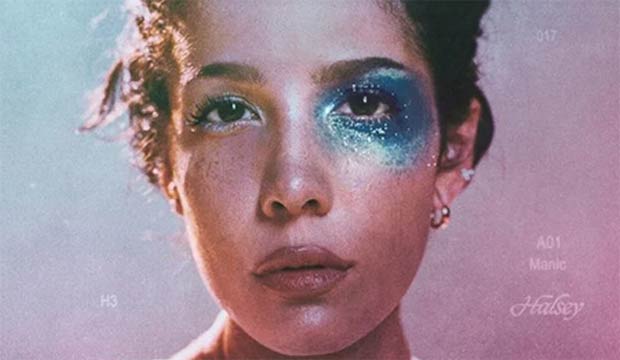 Halsey‘s third album “Manic” was released on January 17, and it’s a creative leap for the 25-year-old singer-songwriter. At least, that’s according to critics.

Music journos have been weighing in since the collection was released, and it has a MetaCritic score of 85 based on eight reviews as of this writing: all of them positive, none of them negative. That’s a huge improvement from her previous LP, “Hopeless Fountain Kingdom” (2017), which scored 66 based on 10 reviews, half of which were mixed.

“Manic” is being described as a “raw autobiographical portrait,” a “chaotic amalgamation of self-analysis, rage, depression, ecstasy and growth.” Her singing has a “pleading tone” and “raspy edges,” and it’s “growing more expressive” over time. She demonstrates “lyricacl confidence,” resulting in “a major label pop album with real drama and humanity.”

Will it be a Grammy breakthrough for her in 2021? She has been nominated twice as a featured artist — Album of the Year as a guest on Justin Bieber‘s “Purpose” and Best Pop Duo/Group Performance for “Closer” with The Chainsmokers — but she hasn’t made the cut yet as a lead artist. She was snubbed entirely at the 2020 Grammys even though her song “Without Me” (which is featured on “Manic”) was one of the most successful hits of last year, ranked third on Billboard’s year-end Hot 100 singles chart.

The snub seemed to sting since Halsey used her American Music Awards acceptance speech last fall to basically subtweet the Grammys, praising the AMAs as a fan-voted award for “the people who give a shit about music” and arguing, “most of these awards really aren’t what they seem at all.” Well, it’s not just fans who she’s got on her side. It’s critics too. Check out some of the reviews below, and discuss this and more with your fellow music fans here in our forums.

Ilana Kaplan (Entertainment Weekly): “Unlike her sophomore record ‘Hopeless Fountain Kingdom,’ which embodied a dystopian ‘Romeo and Juliet’ theme, ‘Manic’ operates like the inside of Halsey’s subconscious … Over 16 tracks, ‘Manic’ is a chaotic amalgamation of self-analysis, rage, depression, ecstasy, and growth that sees its creator managing the messiness of fame while trying to stay true to herself.”

Mikael Wood (Los Angeles Times): “As on her earlier records, Halsey can feel like something of a phantom on ‘Manic,’ even when her writing is as vivid as it is in ‘Graveyard’ … But her singing, with its pleading tone and its slightly raspy edges, is growing more expressive. If you’re still not sure where she wants to go, you can tell how badly she wants to get there.”

Ben Beaumont-Thomas (The Guardian): “Her lyrical confidence is matched by the characterful production, which straddles R&B, country, trashy pop-rock, Kacey Musgraves-ish cosmic Americana and more; I Hate Everybody is like a gothic showtune. The interludes with star guests – Alanis Morrisette, BTS’s Suga – are frustrating, nearly done sketches, but otherwise this is that rare thing: a major label pop album with real drama and humanity.”

Rob Sheffield (Rolling Stone): “The singer doesn’t even come close to finding peace of mind in these songs. Still, she knows how to make it a thrilling quest. ‘Manic’ is Halsey’s raw autobiographical portrait of the artist as a young mess, craving her share of love and tenderness in a hostile world. Yet Halsey’s Ashley Frangipane is a mess who’s a hungrily ambitious artist seeing herself as a mirror for her entire generation.”