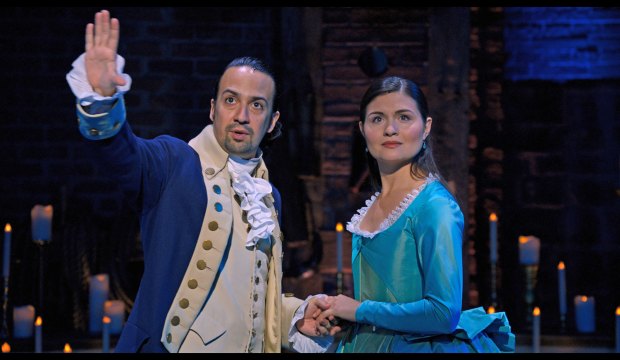 Critics say “Hamilton” is a great musical. That kinda goes without saying at this point, but such a well-known property could have been received with a relative shrug in its filmed version premiering on Disney+ on July 3. If you haven’t seen it on stage there’s a decent chance you’ve listened to the cast recording, which is still on the Billboard charts after 248 weeks — been there, done that. But reviewers are just as enthusiastic about the musical onscreen as they were onstage.

As of this writing the film has a MetaCritic score of 90 based on 28 reviews counted thus far, all of them positive and 10 of which rate the film a perfect 100. On Rotten Tomatoes, which classifies reviews simply as positive or negative as opposed to MetaCritic’s sliding scale from 0 to 100, the film is a perfect 100% fresh based on 67 reviews. The RT critics’ consensus says, “Look around, look around at how beautifully ‘Hamilton’ shines beyond Broadway — and at how marvelously Thomas Kail captures the stage show’s infectious energy.”

That’s pretty impressive for a film that’s not an adaptation of the stage play but rather a filmed version of it, shot on Broadway while the original actors were still in the show. Reviews say those actors are “joyously at home in their roles” and “don’t suffer on screen.” They’re led by Lin-Manuel Miranda, who “brims with understated brilliance” as the title founding father. And the whole production “keeps all the power of a live performance while simultaneously adding a filmic pizzazz.”

It probably doesn’t hurt that Kail, who won a Tony for helming the show on Broadway, also has experience in TV. He won two Emmys for producing and directing a live TV version of “Grease.” And then he earned two more nominations for producing and directing the FX limited series biopic “Fosse/Verdon.” His direction here has been described as “extraordinary,” capturing “the mise en scène of theatre without losing any of the closeup intimacy of film.”

If you weren’t lucky enough to get a ticket to the show on Broadway, are you excited to finally see it now? Check out some of the reviews below, and join the discussion on this and more here with your fellow TV, movie and theater fans.

Lily Janiak (San Francisco Chronicle): “To see performers of color so joyously at home in their roles as founding fathers and mothers, as leaders, as American myths was always one of the show’s chief gifts. In re-envisioning our past, it gave a salutary jolt to our present and helped remap our future. But it’s also newly energizing to revisit the show in our own era of Black Lives Matter activism.”

Arifa Akbar (The Guardian): “It keeps all the power of a live performance while simultaneously adding a filmic pizzazz including some breathtaking aerial shots. There is extraordinary direction — again under Kail — so that the cameras capture the mise en scène of theatre without losing any of the closeup intimacy of film. Miranda’s lead performance brims with understated brilliance. Every actor alongside him performs with just as much conviction.”

Kristy Puchko (IGN): “As promised by endless hype, ‘Hamilton’ comes alive with amazing performances. Miranda is mocking, mirthful, wounded, and wrathful in turn as the eponymous hero. Goldsberry is riveting as the witty and rueful Angelica, who delivers smirks and rapid-fire lyrics with a thrilling confidence … Though played to the cheap seats, these theatrical performances don’t suffer on screen.”

Stephanie Zacharek (Time): “It’s a pleasure — both a delight to watch and a great piece of pop scholarship, an entertainment informed by a sense of history and of curiosity … The musical numbers, all penned by Miranda, slide easily from the braggadocio of ‘90s rap to the lilt of Harlem jazz and beyond. Miraculously, nothing sounds excessively show-tuney.”