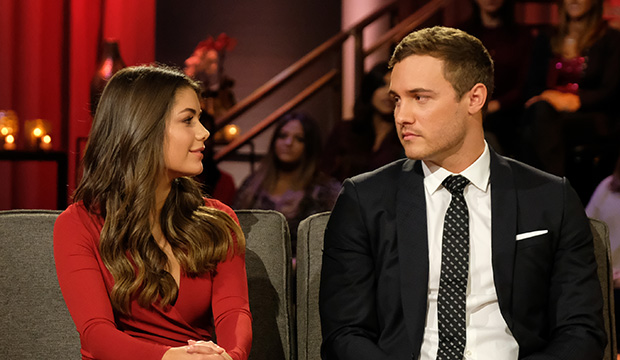 The “Bachelor” franchise bucked tradition by casting Clare Crawley to lead “The Bachelorette” instead of one of Peter Weber‘s jilted ladies from the 24th season. But that’s totally fine with Hannah Ann Sluss. The winner-turned-runner-up told former Bachelor Nick Viall on his podcast “Viall Files” that she would’ve turned down the offer had producers offered it to her.

“I am not ready for that,” she said. “I’ve moved on, but also, it’s different. Right now, dating, no one knows about it; it’s private. But to be dating publicly again on such a national scale, dating not just one person but 20-plus different guys, that’s a huge responsibility. And If I were to ever do that, I’d want to be just so emotionally and mentally strong to where I could take that on. Putting myself in Peter’s shoes, that was a big responsibility.”

Of course, had things worked out for Sluss on “The Bachelor,” this wouldn’t even have been a possibility. Weber popped the question to her, but they ended their engagement after he confessed that he still had feelings for Madison Prewett, from whom he split two days after the finale aired. And after Sluss’ insta-classic “f— off” speech to the pilot on “After the Final Rose,” many fans lamented that she wasn’t the Bachelorette. But the model says she still needed time to work through what had happened.

“I just got engaged, you know, I was very — in my mind and heart, I was already thinking in the future for us,” Sluss explained. “So it’s like, losing the person I thought he was and losing the future thought I had. That takes some time to get back on your feet. Which I have. I wanna date just one right person now.”

Sluss does have a mystery man in her life whom she declined to name. They had connected after he slid into her DMs (how else?) and she’s excited to go on an actual date with him after the coronavirus pandemic is over.

“I actually haven’t been out on a legit date yet because all of this was right before [the finale]. I was just going out with friends, couldn’t date anyone, obviously, because I still could’ve been engaged,” she said. “Now, I’m definitely getting to know some people. There’s one person, in particular, I’m excited to go on a date with after this. … He’s someone who’s been really nice, and I’m excited to get to know more.”