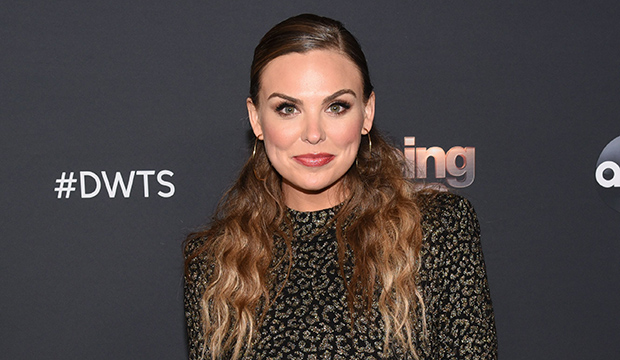 Hannah Brown has apologized for using the N-word during an Instagram Live Saturday night as she continues to face backlash from fans and Bachelor Nation alums alike.

“I owe you all a major apology,” Brown wrote in Instagram Story on Sunday, about 12 hours after the incident. “There is no excuse and I will not justify what I said. I have read your messages and seen the hurt I have caused. I own it all. I am terribly sorry and know that whether in public or private, this language is unacceptable. I promise to do better.”

During an Instagram Live on Saturday evening, the former “Bachelorette” star was trying to learn the TikTok dance to DaBaby‘s “Rockstar.” She sang along with the song out loud, including the N-word, before stopping altogether. Brown didn’t address her use of the slur until minutes later when reading the comments on her Live, laughing and claiming that she was unaware she had used the word and suggesting that perhaps her brother Patrick had. A friend who was offscreen also suggested that another friend had said it, even though Brown was the only person onscreen and singing during the moment in question. 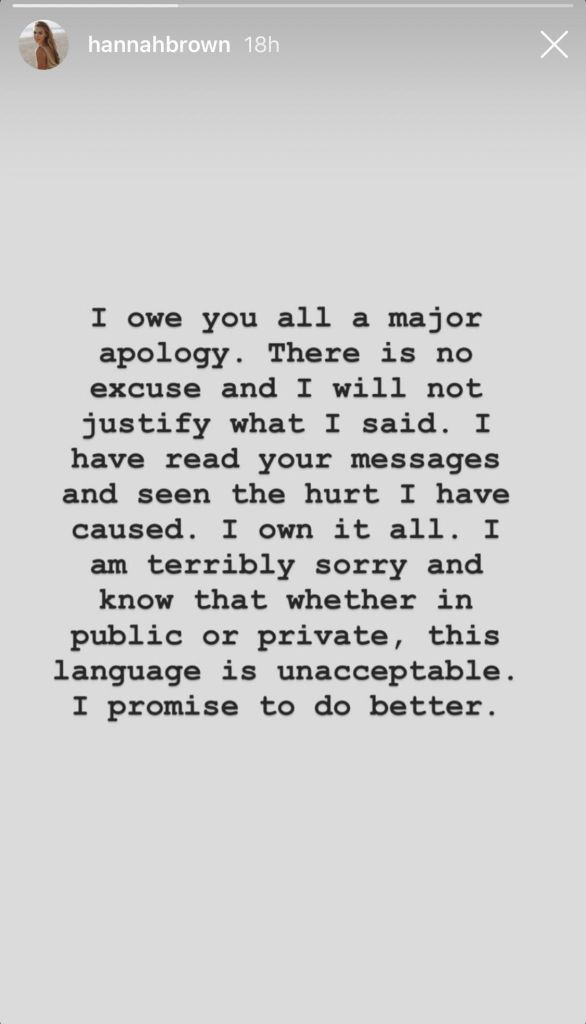 When the comments persisted, Brown gave a lengthier, defensive response, insisting that she didn’t think she had said it and would never use it. “I really don’t think I said that word. I don’t think I said that word, but now, I’m like, ‘Oh God,'” she said. “I’d never use that word. I’ve never called anybody that. We don’t say that word. … So, you know what, I’m going to stay here, and y’all can think I said whatever I did or think I’m something I’m not, but I’m not that. … Look, people are going to want to think whatever they want to think of me, get mad at me, whatever. And even if I did accidentally say it, I’m very sorry. I was singing a song and not even thinking.”

.@hannahbrown singing the n word. This is deplorable and while it isn’t my apology, the fact that you would giggle about it as you and your friend deny you saying it and that you’d say “no that’s Patrick”… beyond impermissible. You need to ACTUALLY address this. pic.twitter.com/6ARR1h3lBe

Fans were unimpressed by the 25-year-old’s tepid and insensitive apology, with many pointing out that Brown sang the N-word but did not sing the F-word.

so you're telling me hannah brown skipped past the f word on the ig live, but still said the n word in the exact same song. I- pic.twitter.com/oPMHh7xaRd

Love how Hannah B says “bull crap” and heck to avoid cursing but is apparently super comfortable with the n word. Here she skips the F word before going ahead with the only word that’s actually unacceptable to say. Wish I was surprised but she’s never fooled me https://t.co/1tthISidWQ

I was a big fan of Bachelorette/DWTS Winner Hannah Brown, until she decided to drop a hard N word in a rap song and then smirk and laugh through an “apology”. HB, you’re done in my book! Now considered irrelevant. @hannahbrown

so just watched that “apology” and the friend next to her rly threw out another friend’s name and the name of Hannah’s brother. like girl wth you were the ONLY visible and audible person in that video.

Bekah Martinez, who appeared on Season 22 of “The Bachelor,” slammed Brown in her Instagram Stories shortly after the incident.

“How are people still gonna defend CELEBS with access to SOOO much privilege, knowledge, and education saying the N-word…even if it’s ‘just the lyrics to a song’…especially when that person had the wherewithal to skip over the F-word lyrics first,” Martinez wrote. “We’ve GOT to hold people accountable to do better otherwise we’re continuing to prioritize the feelings of white people (and someone we ‘stan’) over ending our country’s loooong history of casual racism and flippant anti-blackness.

“And no. You can’t say the N-word just because black people say it. Black people reclaimed the use of a word that was used for centuries to oppress and dehumanize them,” she continued. “It’s a word that holds so much historical weight that the black community is still healing from and parts of the white community are still weaponizing for dehumanization, particularly in the south. so no, it’s not cool to just sing it along the lyrics of a song especially not ON YOUR PLATFORM WITH MILLIONS OF FOLLOWERS?!! It’s 2020. At least make a legitimate apology and acknowledge your behavior.”

The attorney revealed that she had reached out to Brown to speak to her and educate her on the racial epithet and its origins. “I thought, ‘Let me challenge this person to use their platform,’ because last night it was used in a different way, so let me challenge them to use it in a better way, right?” she said. “Maybe it was a mistake. Maybe they didn’t realize the intention behind it, so let me give them the opportunity to now use their platform to now correct that mistake.”

Lindsay was “personally hurt and offended” that instead of verbally apologizing on Instagram, Brown posted a written statement. “It’s easy to make a statement, it’s easy to hide behind words, but when you’re bold enough to say the N-word on camera, on your platform … then you need to be bold enough to use your face on camera and apologize in the same way that you said the word,” she explained. “I’m not discrediting the apology. I’m just saying we can’t give people a pass for this. You have to hold people accountable for what they’re doing.

Tyler Cameron, Brown’s runner-up on “The Bachelorette” with whom she was quarantined for a month, reposted Lindsay’s video, agreeing with her message. “Rachel hit the nail on the head,” he wrote. “Y’all need to go look at the comments. We have a long ways to go on this issue and a lot to learn. If you find yourself getting defensive, you are part of the problem. This is not about dragging HB. This is about using your platform for reasons like this. So we can educate those who don’t get it. This is bigger than HB. This is a societal problem.” He added that Brown is “learning and growing just like every single one of us. Love rids hate. Hate only makes more hate. Let’s learn and lift each other up with love.”

Other Bachelor Nation alum who have weighed in include Nick Viall, who said in an Instagram Story that there is “no excuse” for Brown to use the N-word, and it was “super sad and disappointing to see,” and Ashley Spivey, who in an Instagram Live with Reality Steve, noted that it’s “not black people’s jobs to explain why you can’t use that word.”