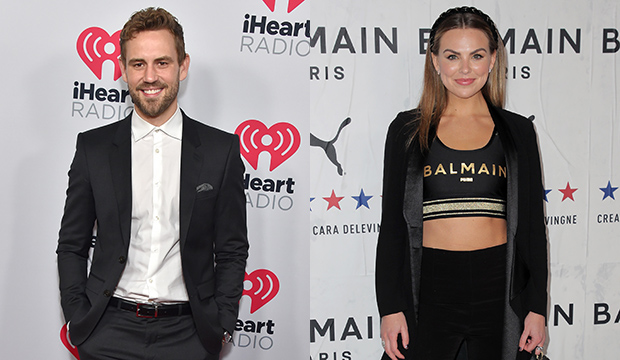 Nick Viall is calling on Hannah Brown to turn her N-word controversy into a teachable moment after being disappointed by her “terrible” and “insincere” apology for using the slur.

The former “Bachelor,” who had previously called Brown’s use of the word — which she said out loud while singing to DaBaby‘s “Rockstar” on Instagram Live Saturday night — “unacceptable,” elaborated on his thoughts on his podcast, “The Viall Files,” on Tuesday. He also posted the segment on Instagram.

“Listen, Hannah Brown has a massive platform,” Viall said. “She has been very outspoken about her desire to be a role model, specifically to young women out there. She has talked about it a lot. ‘When I was a young girl, this. When I was a young girl, that.’ And quite frankly, her going on Instagram Live — whether she was inebriated or not — and using that word in any context whatsoever is absolutely not being a role model, certainly not a good one. And she has to be held to a high standard. We all do. And it is very disappointing to see. Honestly, her initial response was disappointing.

“It doesn’t matter if it’s a lyric in a song,” he continued. “I’ll be honest: It’s been disappointing to see some people’s reactions. I understand there are a lot of people who were fans of Hannah Brown, and if you’re a fan of someone, your initial reaction is to want to defend them. I understand that. But the reality is, it is not OK in any context, in any situation whatsoever, to say that word. And I am very critical of Hannah Brown’s use of that word.”

I understand there are plenty of people who are fans of Hannah and feeling defensive for her. You can be a fan of Hannah and still hold her accountable for her actions both on what she said and how she has addressed the situation up until this point.  I can assure you no one in bachelor nation is trying to drag Hannah over this, in fact, olive branches have been extended to her.  No one is enjoying addressing this topic, but it’s an important topic.  Hopefully one that we all want to learn from.  For those who have DM’d me hateful comments in an attempt to defend Hannah, I hope you take the time to listen to the entirety of my comments on in the most recent episode.  Sending outs lots of love to my supporters, critics, and Hannah.  LETS ALL try to be ALLIES. Thank you for reading and listening.❤️❤️LINK IN BIO FOR FULL EPISODE

Like “Bachelorette” star Rachel Lindsay, Viall was disappointed that Brown, following a flippant live apology on Saturday night, posted a written apology to her Instagram Story on Sunday instead of addressing the situation head-on. Lindsay had also reached out to Brown about making a live apology, and was reportedly planning on going on camera with her, but Brown backed out.

“As Rachel said on her Instagram Live, that doesn’t read as sincere,” he said. “We don’t know whether that came from her heart or if it came from her publicist. The only authentic reaction right now, as it stands as this Monday morning [when we’re recording this], is what she just said on her Instagram Live. And quite frankly, that’s a really, really terrible apology and really insincere, and it comes across as, again, ignorant to what she’s speaking on.”

Viall clarified that he does not think the “Bachelorette” star is racist “from the little bit” he knows of her, but what she did was “very ignorant.” He goes on to implore listeners, especially defenders of Brown, to be an ally to people of color and other marginalized groups.

“I’ve seen a lot of responses from people out there saying, ‘Let’s not pretend that we haven’t ourselves sang it, said this word in the privacy of our car.’ Listen, if you have, it’s not OK. Doesn’t necessarily make you a racist, but it is an ignorant thing to do,” Viall stressed. “We’re so quick, especially as white people, to get very defensive: ‘I’m not a racist, I’m not a racist.’ But I think the real important thing we have to start thinking about is, are you an ally? Are you an ally to people who are different from you? What I mean about being an ally is being a friend, learning about people’s points of views that are different than you, people who have a long history of oppression.”

The two-time “Bachelorette” runner-up added that he does not think Brown should be canceled, but hopes she uses her platform to turn this into a “learning opportunity.”

“Like it or not, Hannah Brown is going to continue to be a role model. The question is, is she going to be a good one, right? She still has a massive following, and this is such a divisive topic that there are still going to be people who are going to side with Hannah Brown regardless,” he said. “The big question is, these young women who look up to her, who support her, is she going to go out of her way to say, ‘This was wrong,’ and to really double down and really embrace her mistake and learn from it and not hide behind her fans that want to defend her? If you are a fan of Hannah Brown, you should not be defending this. If you are Hannah Brown, you should not want your fans to defend you. … She has the opportunity to turn this into a teachable moment and a positive thing. I hope she embraces that and not hopes that this situation goes away.”