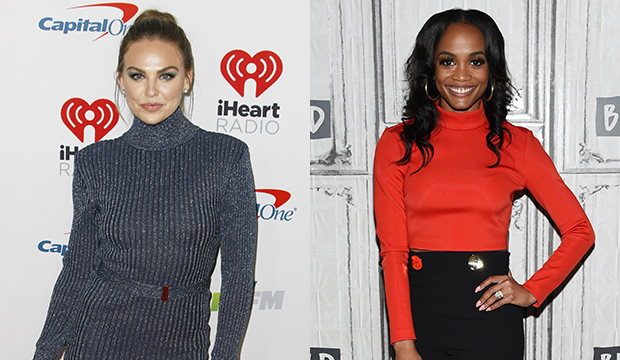 Hannah Brown and Rachel Lindsay had discussed having a live conversation about the former’s use of the N-word on camera together before Brown backed out, according to “Entertainment Tonight.”

As Lindsay revealed in a lengthy video in response to the controversy on Sunday, she had reached out her fellow “Bachelorette” star after Brown said the N-word out loud while singing along to DaBaby‘s “Rockstar” on Instagram Live Saturday night. Lindsay expressed frustration that she was speaking out — “I hate that I have to do this,” she said — as she had “challenge[d] this person to use their platform” to discuss the slur, and was not satisfied that Brown instead apologized via a brief written statement on Instagram.

According to “ET’s” multiple sources, the former Bachelorettes had a long phone conversation Sunday morning about Lindsay joining Brown on an Instagram Live to have an open dialogue about the word and to educate others, but it was never set in stone. “Hannah told her she was open with doing the Live but felt it was important to first address and apologize to her fans,” one source said. “Hannah is devastated and absolutely mortified. This is not who she is.”

Brown’s written statement disappointed Lindsay, prompting her impassioned, nearly 9-minute-long video, another source told the site. “It’s easy to make a statement, it’s easy to hide behind words, but when you’re bold enough to say the N-word on camera, on your platform … then you need to be bold enough to use your face on camera and apologize in the same way that you said the word,” Lindsay said in the video. “I’m not discrediting the apology. I’m just saying we can’t give people a pass for this. You have to hold people accountable for what they’re doing.”

In her statement, Brown wrote: “I owe you all a major apology. There is no excuse and I will not justify what I said. I have read your messages and seen the hurt I have caused. I own it all. I am terribly sorry and know that whether in public or private, this language is unacceptable. I promise to do better.” The statement came almost 12 hours after Brown offered a lukewarm apology during her Live, at one point suggesting that her brother, Patrick, and not her, had said the racial epithet, which angered Bachelor Nation even more.

Brown and Lindsay have not spoken since that conversation, according to the source, but the 25-year-old is “thankful” to have spoken to Lindsay. Brown has since been talking to her pastor and is “trying to listen, learn and take it all in right now.”

A Brown source told “Us Weekly” that the “Dancing with the Stars” champ is “really embarrassed and ashamed” and did not intentionally say the N-word. “She understands that she was completely in the wrong and also understands why people are upset with her,” the insider said. “[The N-word] is not and never has been a part of Hannah’s vocabulary. … At the end of the day, she just really likes ‘Rockstar’ because it’s such a catchy song coupled with a fun TikTok dance.”

Lindsay, the franchise’s first and only black lead, wasn’t the only alum to call out Brown. Bekah Martinez, Nick Viall, Ashley Spivey and Brown’s runner-up Tyler Cameron have all denounced her use of the word. Mike Johnson, who finished in sixth on Brown’s season and looked like he was going to be the first black Bachelor before Peter Weber was chosen, called it “unacceptable” and has also extended an invite to have a conversation.

“Issues like this bring light to the bridge of pop culture and racism within our country,” he told TMZ. “I’m inviting her and everyone to a conversation in hopes to educate everyone that this type of behavior needs to be changed and is unacceptable. My aim is that in this moment we don’t divide, we come together, learn from this and create change for the better.”