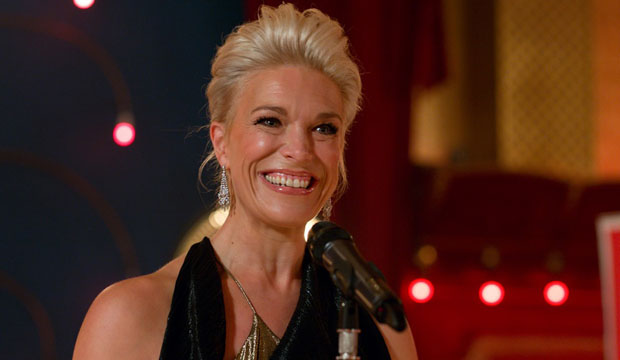 AppleTV+’s hilarious and often endearing new comedy might be called “Ted Lasso,” but, beware: its best scenes are often stolen by the show’s most intriguing, devious, snarky, diabolical, hilarious and even beloved characters: Rebecca Welton. The elegant and wickedly brilliant Hannah Waddingham imbues her character with an artful flair for drama, highlighting her musical theatre background in a number of both small and show-stopping moments on screen.

The show’s premise originated in 2013 as a promotional commercial for NBC Sports when Jason Sudeikis introduced the titular Ted Lasso, an American football coach who is now hired, quite strangely, to lead a British soccer team. Why? Just because both sports are called “football”? Sure, Lasso is a laughable choice, but he also sports an inspiring, heartwarming camaraderie that Ms. Welton often tries to muck up.

It turns out that she had a secret reason for hiring such an unqualified goofball. She doesn’t care if the team loses most games. After a recent divorce, she acquired the club from her cheating ex, who was a passionate fan, so she schemes for revenge by exulting in its poor performance. Yet, as her backstory unfolds, we start to realize that Rebecca is far from villainous.

Apart from Lasso who unites the team with his quirky attitude and corny jokes, it’s Rebecca on whom the show focuses its attention. The first words of the season, “Rupert and I,” reminisce upon seemingly happier times but show how minimized she felt under his control. Even before he first appears in the fourth episode, his haunting memory makes its way into multiple conversations in the stadium. When he finally does appear, he uses every word to belittle her character. Having transitioned from an abusive relationship into a grueling, male-dominated field, she has been conditioned to attack as a lioness; enacting revenge seems to be the easiest means to disparaging Rupert’s name.

Throughout the season, she finds solace in Ted, also going through a marital hardship, and Keeley Jones (Juno Temple), whose cheeky wisdom and drunken girls’ nights reinvigorate her self-confidence. Ted’s jokes hit their mark, but sometimes Keeley’s candid remarks spark a more effective reaction: “You’re being a right floppy cock, Rebecca.” The climax to Rebecca’s story comes in the seventh episode, aptly titled “Make Rebecca Great Again,” when she belts a beautiful rendition of “Let It Go.”

Concurrently, Ted experiences a panic attack and Rebecca is there to help him through it. In this vulnerable moment, she acknowledges that letting go of her pain and loss- much like all of the other characters- will allow her actual freedom and happiness. From this point forward, she begins to genuinely root for the team until the final shot of the season captures her in a much less precarious (albeit hilarious) situation. Being the bookend to the season shows the viewer just how much Rebecca has grown and leaves things open-ended for what’s to come.

After an enchanting season that is wildly addictive to watch (and rewatch in order to catch quick, witty moments that are easy to miss), it’s fun to wonder what lies in store for this new family of characters. The show has yet to begin filming its second season, but due to an overwhelmingly positive reception, has already been renewed for a third season.

One thing is for certain: Rebecca deserves to come strutting into her office to, or slay another karaoke performance of, “Boss Bitch” by Doja Cat. In the words of Ted’s favorite saying: “Do you believe in miracles?” Well, if you said no, then in the words of Rebecca Welton, “F**k the haters.”