Harry Styles recently hit number-one on the Billboard Hot 100 singles chart for the first time in his career with “Watermelon Sugar.” Usually an artist’s biggest hit is their strongest bet for Grammy Awards, where the highest-profile music tends to win the day. So we asked our readers to weigh in: does he have a better chance at kudos with “Watermelon” or with his previous top-10 hit “Adore You”? Scroll down to see our complete poll results.

According to most of our respondents, it pays to go with the chart-topper: 56% say “Watermelon Sugar” has a better chance of winning Grammys. The provocative summer hit surged to the top spot on the Hot 100 dated August 15 after gradually rising up through the ranks for 20 weeks. It made him the second One Direction alum to get a number-one hit following Zayn‘s ascent with “Pillowtalk” in 2016 — though that song didn’t manage to get Zayn to the Grammys.

The other 44% of our readers said “Adore You” is the bigger Grammy contender. It didn’t chart as high, but it has been on the Hot 100 for 36 weeks as of this writing and made it to number-six, which still makes it one of his biggest hits as a solo artist. And it’s also the kind of sentimental love song that more musically conservative voters tend to gravitate to; consider recent champs like Lady A‘s “Need You Now,” Adele‘s “Hello” and Sam Smith‘s “Stay with Me.”

As of this writing, the Gold Derby users who have made their predictions here in our predictions center still think “Adore You” has a better chance for both Record of the Year and Song of the Year, but that song has had longer to build support in our odds, so “Watermelon” may yet rise. What do you think? 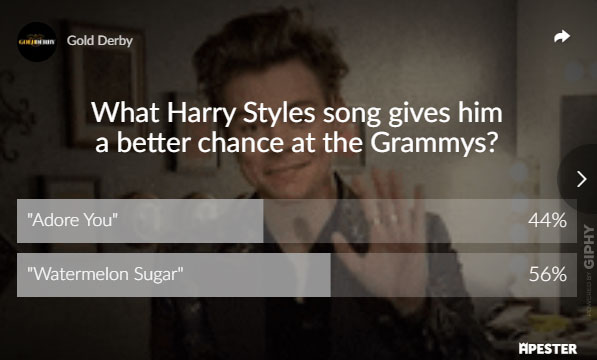