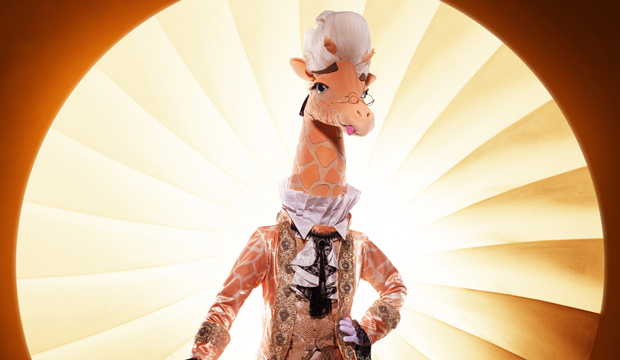 Episode 3 of “The Masked Singer” on October 7 featured five celebrities disguised once again as the Sun, Giraffe, Popcorn and Snow Owls. These season 4 contestants survived their initial appearances on the premiere episode, which aired back on September 23. The sixth member of Group A, the Dragon, performed “Mama Said Knock You Out” by LL Cool J. He lost the audience vote and was revealed to be rapper Busta Rhymes.

We’ve watched those first performances of the remaining five contenders in Group A and have all of “The Masked Singer” spoilers for season 4, including the identity of the Giraffe who sang “Let’s Get It Started” by Black Eyed Peas. Keep reading if you want to know the real name of the Giraffe.

Forget the panel guesses that the Giraffe is Travis Barker, Garth Brooks or Vanilla Ice. All of these clues, combined with the collective ones about all 16 celebrities taking part on season 4 of “The Masked Singer,” have us convinced we know who is hidden inside the Giraffe costume.

We are certain that the Giraffe is ex-NFL player Peyton Manning. Do you think it is someone else? We ask that you have a read of our reasoning.

Before taking to the stage, the Giraffe offered up several clues as to his identity. In the sneak peek episode, he revealed that he shared something in common with a powerful giant. That has to be a reference to Peyton’s kid brother Eli Manning, who was the star quarterback of the New York Giants for 16 seasons.

The Giraffe teased us that “trying to figure out my identity is going to be a real pain in the neck.” Manning had to miss the 2011 season to recover from neck surgery. That would also account for the Giraffe’s admission to having had “a roller coaster career full of ups and downs.”

Collectively, the season 4 contestants can boast of five Super Bowl appearances. Manning would account for four of those: 2006, 2009, 2013 and 2015. The first two of those were for the Indianapolis Colts while the latter pair were for the Denver Broncos. He carried each of these teams to victory once.

Manning measures in at 6’5″, which would make him the ideal celebrity to strut around the stage in a costume that tops out at eight feet.

We won’t know for sure if Peyton Manning is the Giraffe until he is unmasked. That will happen when he loses an audience vote or wins the show. Do you think we are right about the true identity of the Giraffe? Sound off in the comments section with your best guesses.