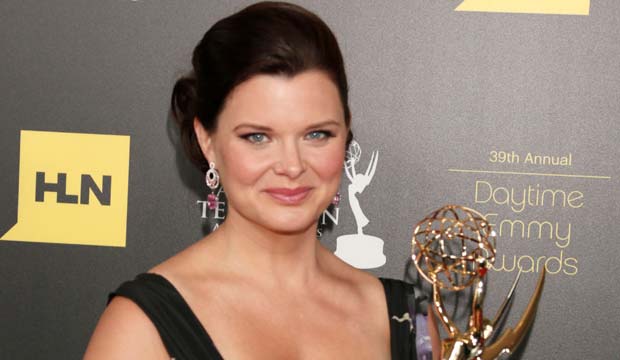 Heather Tom has earned yet another Daytime Emmy nomination for Best Actress for playing Katie Logan on “The Bold and the Beautiful.” Her career has now entered its fourth decade spanning three different soap operas, and for the last several years she has been on the verge of history. One more victory would tie her with Erika Slezak as the most awarded actress ever at the Daytime Emmys. But that milestone win has proven elusive.

Tom broke through in daytime on “The Young and the Restless” as corporate heiress Victoria Newman. She joined that show in 1990 when she was just a teenager and played the role for 13 years. Along the way she earned nine Emmy nominations, winning Best Younger Actress twice (1993, 1999).

Then Tom jumped over to “One Life to Live,” where she took over the role of Kelly Cramer for three years (2003-2006) and earned two more Daytime Emmy nominations for Best Supporting Actress in the process (2005, 2007). Her 2005 nomination was itself historic. That was her 10th bid, which set a record for the most nominations for any actress under age 30.

In 2007 Tom took over her current role as Katie on “B&B,” which had previously been played by Nancy Sloan on and off since the show’s premiere in 1987. Once again the television academy showered her with recognition: eight more nominations to date, including three wins in a row: Best Supporting Actress in 2011 and then Best Actress in 2012 and 2013. As of now, she’s still the only woman to have won Emmys as a younger, supporting and lead performer. And she has now spent as much time on “B&B” as she did in her star-making role on “Y&R.”

SEEWill Eva LaRue finally win a Daytime Emmy for her guest role on ‘The Young and the Restless’?

But Tom’s record-tying Emmy has eluded her grasp. Tom has now been nominated four more times for Best Actress (2014, 2017, 2019, 2020) since her last victory, but it has been seven years since her last visit to the podium. Will this be her historic year? Well, according to our current racetrack odds it will be a historic race, but not necessarily for Tom. Her “B&B” co-star and on-screen sister Katherine Kelly Lang is currently the odds-on favorite to win, which would be her first ever victory after 33 years on the soap. Do you think one of the “Bold and Beautiful” siblings will get it?