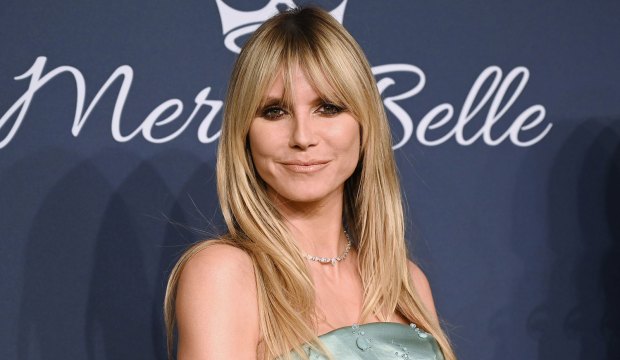 The longest-serving female judge on “America’s Got Talent” has returned to take her seat on the panel. Heidi Klum, age 47, originally served as a judge between 2013 and 2018, plus her two seasons on “AGT: The Champions.” She joined up with recurring judges Simon Cowell and Howie Mandel as well as newbie Sofia Vergara in the Season 15 premiere, which aired on NBC two weeks ago. Are you happy the German model, businesswoman and “Making the Cut” host is back on “AGT” for this summer cycle? Vote in our poll below.

Already this season Heidi has made headlines for kissing a pig and for boosting the confidence of contortionist Frenchie Babyy, whose parents didn’t approve of his wild dancing. But that’s not all. Heidi told Gold Derby exclusively that she got to press her Golden Buzzer for a deserving act before the coronavirus pandemic temporarily shut down production. “I was very happy and lucky that I got to actually push my Golden Buzzer, that I didn’t wait,” she revealed.

It’s been reported that Heidi won’t appear in all of the “AGT” audition episodes this season because she fell ill, so Sofia’s “Modern Family” co-star Eric Stonestreet will soon take over for her on the panel. However, Heidi’s feeling much better now so we can expect to see her in later rounds of the reality TV show.

Heidi and Sofia were able to join the judges’ table after Season 14 panelists Gabrielle Union and Julianne Hough were released from their contracts after only one installment. Throughout her first six years on the main show Heidi anointed such memorable Golden Buzzer acts as Arielle Baril, Makayla Phillips and Sal Valentinetti, though none of them went on to win. See Heidi’s complete Golden Buzzer history.

Heidi’s fascination with the more obscure acts prompted her to proclaim her all-time favorite to be The Professional Regurgitator, the man who swallowed various items and then threw them back up on command. She also had a memorable on-again, off-again “showmance” with comedian Taylor Williamson back in Season 8.