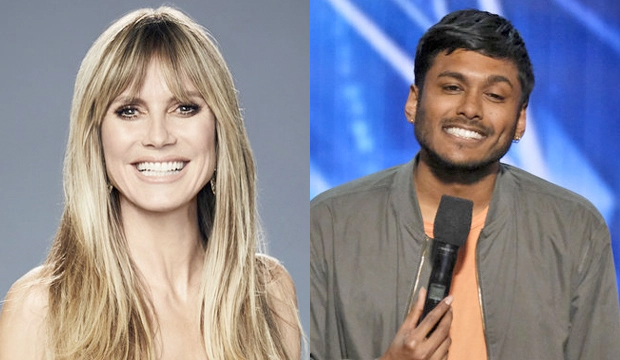 Stand-up comedian Usama Siddiquee took a big risk during the August 25 “America’s Got Talent” live show by doing a set filled with controversial material. For a family show like “AGT,” it’s rare for a comedian to make the judges visibly cringe, but Usama did just that when he joked about 9/11 and how club DJs have the ability to tell women they shouldn’t vote and should go back to the kitchen. However, when he called Heidi Klum a “tramp” on live television, that’s when things got really, really awkward. Read the judges’ comments below and watch Usama’s routine right here:

In a nutshell, Usama’s jokes centered on his name sounding a bit too much like terrorist Osama bin Laden, and how that causes him problems at the airport. He then shifted focus to how DJs have a unique ability to say anything they want, i.e. sexist comments, as long as they drop a beat afterwards. “When that beat drops, so does feminism,” he remarked. To prove his point, Usama called Heidi a “tramp” several times as he pretended to drop multiple beats. When the camera cut to her, the German judge wasn’t smiling.

“What did I think?” Heidi asked bluntly following his performance. “I mean, I don’t know. I guess being called a tramp probably was my least uncomfortable part of the whole thing. But that’s just me.” She then added, “Let’s see what America thinks.” Only five of Tuesday’s 11 acts will go through to the semi-finals on NBC’s reality TV show, and we’ll find out the results on Wednesday night.

Howie Mandel, who rose to fame as stand-up comedian, chimed in jokingly, “She’s the only woman who doesn’t want to be called a tramp.” Even though Howie laughed at Usama’s set, he sympathized with how “really, really tough” it is for a comedian to excel without a live studio audience. “I think that you started out fantastic and I love your energy and I love your commitment,” he stated initially.

The third judge, Sofia Vergara, echoed Heidi’s comments. “I was laughing and then for a second I’m like, should I be not laughing?” Sofia wondered aloud. “Should I feel guilty that I’m laughing? You took a very risky theme for this performance. I think that you have an amazing presence.” She finished by suggesting Usama should become a sitcom actor because of his special “energy.”