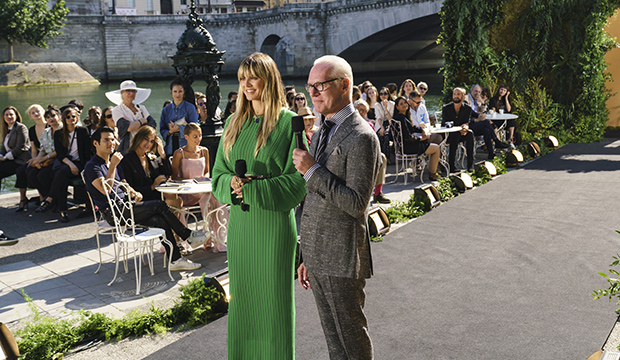 Heidi Klum and Tim Gunn said, “Auf wiedersehen” to “Project Runway” in 2018 after 16 seasons to create a new Amazon fashion competition series, “Making the Cut,” a decision they said was a long time coming.

During the “Making the Cut” panel at Tuesday’s Television Critics Association winter press tour, the supermodel explained that she, Gunn and executive producer Sara Rea felt their “hands were tied for many, many years” due to the limitations they had at “Project Runway,” such as a tight budget and sponsor obligations that would dictate challenges.

“Our imaginations were bigger than what we were allowed to do. There’s a certain look to a show that you maybe sometimes don’t want to change and didn’t change,” she said. “You can’t have the creative freedom that [you can have] when you don’t have someone who’s like, ‘We’re a water company, so you have to make something out of these water bottles and lids.’ There’s nothing wrong with that, and it was great and a lot of fun, but those types of things.”

The turning point, she says, was when “Runway” was moving back to its original network Bravo from Lifetime for Season 17. Klum felt that was the perfect time for her and her longtime collaborators to spread their wings. “I was like, ‘OK, either we go back again and it’s going to be same ol’, same ol’ or now it’s an opportunity time to jump ship,'” she recalled. “I called Tim and said, ‘I’m jumping this ship. Do you want to jump with me?’ I don’t know where it’s gonna go, but it could be really good to see what we could do.”

“We jumped together,” Gunn quipped, adding that “Runway” also fell into a regimented formula that, while reliable and profitable, grew stale. “Who knew when we were taping Season 1 of ‘Project Runway’ that it’d be a success? I certainly didn’t. I thought this would be some good cocktail party talk, this would never happen again. So when we actually returned for Season 2, we were in a lockstep in a way with a formula that had been determined in Season 1 and you perpetuate it further in Season 3 and then eventually into Seasons 10 through 16. We couldn’t break out of it because there was a fear, not among us — we were the ones thinking creatively and innovatively about what we wanted to do — but from the viewpoint of where the show’s set, there was a fear about leaving that formula. Now, I hope you’ll find that there are constant surprises.”

They, of course, jumped to Amazon to create “Making the Cut,” a 10-episode globe-trotting series that seeks to find the next global fashion brand among 12 designers. Nicole Richie, Naomi Campbell and Joseph Altuzarra are among the judges. The winner will receive $1 million to invest in their brand, and all the episodic winning looks will be available for purchase at the “Making the Cut” storefront on Amazon.

“For the first time, finally, our audience can shop. It’s a win-win situation for everyone,” Klum exclaimed. “It was very important for me that we were gonna go with a company such as Amazon versus other companies in order to have that component for these designers because that was never possible before. You see something you want, but you can’t have it. Here, you have a winning look every week and people buy it around the world. It couldn’t have been more of a perfect fit.” (Pun probably intended.)

Gunn noted that “Making the Cut” would not have been possible without “Project Runway.” “I would say ‘Project Runway’ is the undergraduate program and ‘Making the Cut’ is the graduate and PhD program. In ‘Project Runway,’ we talked about how a sleeve is sewn into a bodice. You don’t hear a conversation like that happening on ‘Making the Cut.’ It’s more about how does this mini collection that you’ve designed for this particular episode’s assignment fit into your larger view of your brand? It really is about finding the next global brand. And we do.”

“Making the Cut” premieres on Amazon Prime on Friday, March 27. Two episodes will drop every week, with the finale set for April 24.