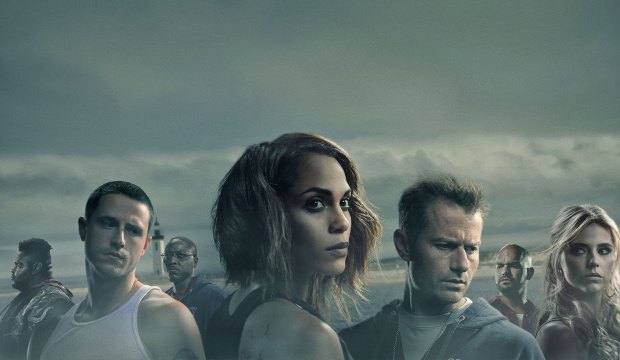 Today Starz officially unveils its new, weekly drama series “Hightown,” making its first episode free to view across many digital platforms. A new episode will be released each Sunday.

“Hightown” is a mystery thriller set on Cape Cod where Jackie (Monica Raymund), a National Marine Fisheries Service agent, discovers a dead body on the beach, which prompts her to clean up her own life until she’s drawn into the murder investigation. James Badge Dale co-stars as a narcotics investigator who also becomes obsessed with the investigation.

The series was created by Rebecca Cutter, who was previously a writer on “The Mentalist” and a writer and producer on the “Batman” prequel series “Gotham.” Jerry Bruckheimer is also an executive producer; in addition to his Emmy-winning work on the globe-trotting reality competition series “The Amazing Race,” he also produced the detective dramas “Cold Case,” “Without a Trace” and the “CSI” franchise, among many others. Rounding out the cast are Riley Voelkel, Shane Harper, Amaury Nolasco, Atkins Estimond and Dohn Norwood.

The free preview of “Hightown” is available on the following platforms: STARZ App, Amazon, Apple, ATT TV, Charter, Comcast, Cox, Dish, DirectTV, Google, Roku, Sling, Verizon and Xfinity. The series had been selected to screen at the 2020 SXSW Film Festival this spring, but that event — and numerous others — had to be cancelled to try to curb the spread of the coronavirus. But now you can sample the series from the comfort (and safety) of your home.