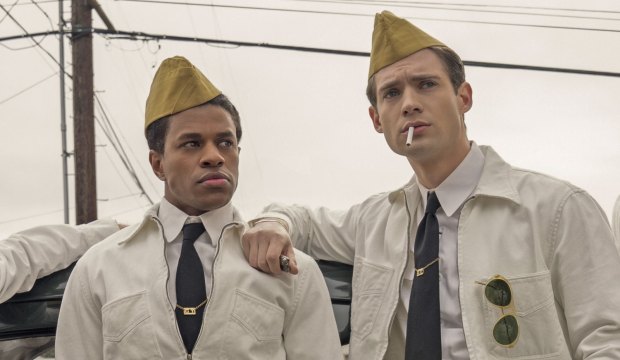 Over the years the Emmy race for Best Movie/Limited Actor has been ruled by veteran thespians, from character actors to Oscar-winning movie stars. But there has been a shift in the last three years. Up-and-comers under age 35 have been winning, and they’ve actually been getting younger. That could be good news for “Hollywood” stars Jeremy Pope and David Corenswet, two 20-somethings in a field of seasoned rivals.

In 2017 the Emmy went to 34-year-old Riz Ahmed for the criminal justice drama “The Night Of.” He wasn’t a household name at the time, but he still managed to overcome A-listers Benedict Cumberbatch (“Sherlock: The Lying Detective”), Robert De Niro (“The Wizard of Lies”), Ewan McGregor (“Fargo”), Geoffrey Rush (“Genius”) and Ahmed’s own co-star John Turturro.

And in 2019 Jharrel Jerome made history by winning Best Movie/Limited Actor at the age of 21 for his role as the wrongly imprisoned Korey Wise in “When They See Us.” He was the first actor in his 20s ever to win the award and the second-youngest of all time. That record is still held by Anthony Murphy, who was just 17 when he prevailed for “Tom Brown’s Schooldays” in 1973.

That bodes well for Pope, who will be 28 when Emmys are handed out this fall, and Corenswet, who will be 27. Pope plays a gay Black screenwriter struggling to break through in the discriminatory 1940s studio system. Corenswet plays an up-and-coming actor who reluctantly takes a job as a gigolo to make ends meet while striving for his big break as a movie star. The showbiz insiders who vote for the Emmys will certainly be able to relate to characters striving for their art.

And “Hollywood” was created by Ryan Murphy, who previously made the aforementioned “Assassination of Gianni Versace” that won Criss his Emmy. That was part of his “American Crime Story” anthology series, which also won Best Movie/Limited Actor for Courtney B. Vance for “The People v. O.J. Simpson.”

SEE‘Hollywood’ on Netflix: Love, Emmy (and a big hug from Oscar)

So the movie stars who lead the way in our latest odds shouldn’t get too comfortable. Oscar nominee Mark Ruffalo is out front with 71/20 odds for playing twins in “I Know This Much is True.” He’s followed by Oscar winner Russell Crowe with 5/1 odds as Fox News mastermind Roger Ailes in “The Loudest Voice.” And Oscar nominee Hugh Jackman rounds out our top three with 11/2 odds for playing a corrupt school superintendent in “Bad Education.”

Those odds are based on the combined predictions of about 2,000 Gold Derby users who have been making and updating their forecasts here in our predictions center. We should all keep in mind that in this Emmy category at least, youth is no longer wasted on the young.

MAKE YOUR PREDICTION: Who'll win Emmy for Best Movie/Mini Actor?
To save your prediction, you must log in to Gold Derby. Click here to sign in with existing account -- or create a new one.
PREDICTthe 2020 Emmy nominees now; change through July 28