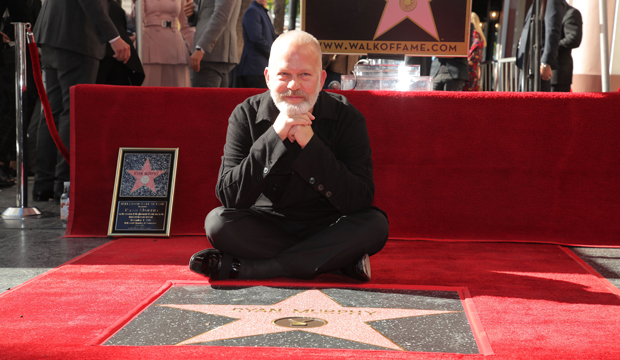 Ryan Murphy just tossed his marvelous “Hollywood” into the mini/movie Emmy races like a spicy sausage into a piranha tank.

Oh, Ryan, you sly Emmy puss! You, of all people, knew how much trouble this new contender would cause. You’ve got millions of Netflix watchers throwing pillows at their screens at home, shouting: “Oh, come on! You can’t expect me to believe that there was really a gas station like that back in old Hollywood!”

You’ve got TV critics crucifying each other while trying to impose their huffy opinions about “Hollywood” as mass groupthink (“It’s a masterpiece!” “No, it’s a misfire!”) and, meantime, over at The Wrap, you’ve got poor Steve Pond scrambling for his wrinkled copies of “Inside Oscar,” “The Big Show” and “Movie Awards” to get to the bottom of how you screwed up Oscar history like that! On purpose!

First of all, a cautious note to all Emmy prognosticators: don’t pay too much mind to what some grouchy TV critics think at this early point in the Emmy derby. It looks like we’ve got another “Green Book”/ “Bohemian Rhapsody”/ “Joker” / “Jojo Rabbit” situation like we had recently at the Oscars and we’ll soon have again at the Emmys for “The Morning Show.”  You know, modest critics’ score at Rotten Tomatoes at first, but adored by real, enthusiastic viewers.

Next up: “Hollywood” will get tons of Emmy nominations and wins. Because it deserves them.

“Hollywood” actually has received lots of great reviews so far, including nosegays from USA Today, Rolling Stone, CNN, Entertainment Weekly, Washington Post, London Times, Hollywood Reporter and more. But its total critics’ score at RT is “only” 58, as award trackers say. However, regular TV viewers give it an impressive 80 score. That’s more like it and Emmy voters, I think, will probably agree.

“Hollywood” is so good, so clever, so sexy, important, shocking and wondrous that it will be irresistible to the town’s award voters. In order to do their jobs right, creators Ryan Murphy and Ian Brennan had to infuriate TV critics who automatically hate sugarplum sentiment and plots so deliriously giddy that you want to go out dancing right away after you see ’em, even dust off your own, secret Oscar acceptance speech.

At the Emmys, “Hollywood” will certainly be nominated for, and win, lots of trophies. Yes, those mini/movie categories are crowded and fiercely competitive, but that’s good news for “Hollywood.” It’s very different from most rivals and, frankly, it’s about the world of the voters: the entertainment industry at its most glorious, optimistic, aspirational, inclusive, courageous and loving.

It’s “La La Land” with the guts to have a happy ending. Because it has to.

Ryan Murphy, Ian Brennan and Netflix are sick and tired of the old, nightmare version of showbiz. In Tinsel Town, story-tellers have the power to make all dreams come true, don’t they? So why not? Haven’t you heard? The whole world’s gone mad and we need this “Hollywood” right now. What’s more: Since the whole world’s on lockdown and watching Netflix right now, all Hollywood is viewing “Hollywood” and so that means the town’s award voters are giving it serious consideration.

That’s all that’s needed. I have a hunch that voters – who are industry insiders – will have special appreciation and enthusiasm for it. In fact, my guess is that “Hollywood” is about to follow a similar trajectory at the Emmys that we recently saw play out with “Jojo Rabbit” at the Oscars. That can be painful, but – oh, irony of ironies! – it can all end up with happy Hollywood endings in many kudos categories.

Let’s not forget that, when “Jojo Rabbit” debuted at the last Toronto Film Festival, it was greeted with a cheering standing ovation. I was there, joined in the frenzy and presumed that the movie would be widely beloved. Just like “Hollywood,” most reviews that “Jojo” received were positive, but, hmmm, there were a few mean ones. Really nasty. So vicious that strong peer-group pressure started, strangely, to build among journalists to agree with the hate. Automatically. The minute “Jojo” came up in everyday professional discussion you were, I swear to God, supposed to start trashing it. Huh? Who decides this stuff? Same damned thing happened to “Bohemian Rhapsody” and “Green Book” – both marvelous movies!

SEE‘Hollywood’: Will Ryan Murphy’s revisionist history get a happy ending at the Emmys?

Now here comes a very odd backlash against “Hollywood” among a few cool cats. The negativity is not as strong as that early “Jojo” bashing, of course, but I’m sure you’ve noticed: some TV critics, a small minority, are emotionally invested in disliking it. And that’s totally predictable.

TV and film critics are notorious for taking aim at unbridled sentiment and prestigious mainstream productions packed with stars, of course, so “Hollywood” had both biases to overcome when facing TV critics. But the whole point of this prestigious Netflix mini is to surrender gloriously and joyously to sentiment. Let’s see Hollywood without its cynicism. Let’s make a naively positive, happily-ever-after world real right now, damn it!

The result is a blast and a hoot – especially how everything plays out at the Oscars in the plot. OMG! Poor Loretta Young. (Beware: Ryan Murphy – you must go to Oscar hell for this, you know.) This whole wonderful shabang of a miniseries was built as a giant, oozing, tap-dancing target for crusty cynics, so don’t be surprised if a few tut-tutting TV critics take the bait.

The most important thing is: What will Emmy voters think?

Remember, “Jojo” turned out fine. It ended up with seven Oscar nominations, including a bid for Best Picture, and it pulled off that crowd-pleasing win for adapted screenplay. The movie that had the most nominations among all Oscar contenders – “Joker” – initially got mediocre reviews. So did “Judy.” All three films ended up triumphant on Oscar night. What’s curious to note: “Jojo,” “Joker” and “Judy” all scored sky-high audience ratings at RottenTomatoes and Metacritic from the outset, but all three had early, low critics’ scores that had to build slowly through Oscar season.

And that’s just what will happen now with “Hollywood” at the Emmys. Expect its critics’ score to build gradually between now and late July, then, when nominations come out, expect the mini to nab a boatload.

What gives? Lately, we’ve seen Oscar and Emmy voters frequently tell film and TV critics: “Screw you! We love ‘Jojo,’ ‘Green Book’ and ‘Bohemian Rhapsody’ and that’s that!” When Hollywood industry insiders break with journalists like this, it’s usually because they’re voting with their hearts.

Ah, “Hollywood” gives them so much to love.