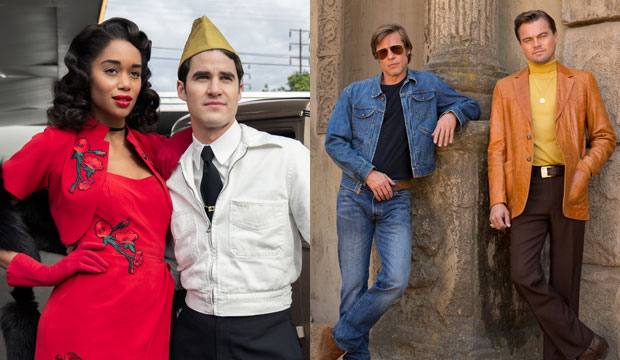 Hooray for a different kind of “Hollywood”! Ryan Murphy‘s seven-episode limited series premiered on May 1 on Netflix in the hopes of cleaning up at the Emmys this fall. It has much in common with Quentin Tarantino‘s “Once Upon a Time in Hollywood,” which ruled the Oscar nominations earlier this  year but couldn’t quite win Best Picture. Will Murphy’s rewrite of history fare better with the television academy?

Murphy and Tarantino clearly adore the golden era of show business and have been exploring Hollywood history for years, though from markedly different angles. From Tarantino’s grindhouse homage “Death Proof” to Murphy’s take on celebrity rivalry in “Feud: Bette and Joan,” they have taken ample inspiration from the past, so it’s no wonder that both of them wanted to right some wrongs in the histories they’ve devoted themselves to.

SEENetflix schedule: Here’s what is coming and leaving in May 2020

“Once Upon a Time” flashed back to the 1960s, when a washed-up TV actor and his stuntman (Leonardo DiCaprio and Oscar champ Brad Pitt) encounter the Manson Family and things turn out very differently than they did in real life. Murphy’s “Hollywood” is more interested in the artists who never even got a chance to be washed-up stars. He focuses on gays, women and people of color, who in the 1940s were ignored, excluded or outright persecuted by the industry — what if things turned out differently for them too?

The good news for Murphy is that he already has a great track record at the Emmys. He has won six times as a producer and director, including Best Limited Series prizes for his “American Crime Story” anthologies “The People v. O.J. Simpson” (2016) and “The Assassination of Gianni Versace” (2018), plus Best TV Movie for “The Normal Heart” (2014).

That might be even better news for Netflix, which still has never won Best Drama Series, Best Comedy Series or Best Limited Series despite consistently receiving tons of nominations for their glut of programming. Could this be their ticket to a top prize? As of this writing “Hollywood” ranks among our top five predicted nominees for Best Limited Series, ranked fourth with 13/2 odds based on the combined forecasts of Gold Derby users.

So far 11 of the Expert journalists we’ve surveyed agree it will be nominated, and Gold Derby’s own Tom O’Neil thinks it’ll win. Three of the Editors who cover awards year-round for Gold Derby think it will prevail too. Will “Hollywood” indeed get a Hollywood ending?