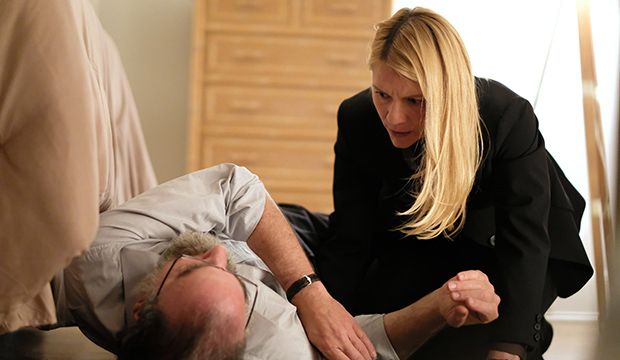 Since Lesli Linka Glatter received her first Best Drama Directing Emmy nomination for “Mad Men” in 2010, she’s amassed four more bids for her directorial work on “Homeland,” with noms for “Q&A” (2013), “From A to B and Back Again” (2015), “The Tradition of Hospitality” (2016) and “America First” (2017). After a three-year hiatus, will voters welcome her back for the Showtime hit’s eighth and final season? Do not count her out.

Like for Seasons 3 through 7, Glatter directed four of the final season’s 12 episodes, the first two, “Deception Indicated” and “Catch and Release,” the seventh “F—er Shot Me,” and the series closer “Prisoners of War.” I anticipate she submits the finale, which chronicles Carrie’s (Claire Danes) mission to uncover the identity of Saul’s (Mandy Patinkin) Russian asset and hand her over to the Russians in exchange for the flight recorder of the U.S. president’s helicopter. Pakistan and the U.S. are on the brink of war, an outcome that can only be averted by the release of the flight recorder’s content, which reveals that the helicopter wasn’t, as presumed, shot down by the Taliban, but crashed due to mechanical malfunction.

While, in typical “Homeland” fashion, the episode is a nail-biter from beginning to end, it isn’t about the thrills, but rather about our two core characters, Carrie and Saul. It’s a rough hour for them, as, for the most part, they find themselves at odds, with Saul unwilling to give up his asset’s identity, forcing Carrie to betray his trust, begrudgingly so but aware that a bloody war is otherwise on the horizon. Maybe it’s not how we expected to see our favorite espionage duo sent off, but the central conflict remains oh-so true to who these characters are: Carrie protecting her homeland at all costs and Saul standing firm in his unwavering loyalty.

Glatter has been a director on “Homeland” since the second season, which you can tell by just how much she trusts her actors. When Danes and Patinkin are onscreen together, she allows them to toy with the script, but frames them in such a way that every flash of emotion on their faces carries a tremendous amount of heft. Take the scene early in the episode in which Carrie, after administering a paralytic agent to Saul, begs him one last time to unveil his asset’s identity, to which he bluntly retorts, “Go f— yourself.” The line is a direct callback to Carrie’s “F— you, Saul” in season 3’s second episode “Uh… Oh… Ah…” — also helmed by Glatter — which sees Carrie, against her will, committed to a psychiatric facility on Saul and Dar Adal’s (F. Murray Abraham) orders. The circle is closed exquisitely: Saul betrayed Carrie’s trust, now Carrie betrayed his; neither one wanted to, but they considered it the right thing to do.

When Saul’s asset, Anna Pomerantseva (Tatyana Mukha), is compromised, she asks Saul over the phone for permission to take her life before the Russians get their hands on her. By keeping the camera on Patinkin’s face, Glatter captures Saul’s raw reaction — anger, heartbreak and immense sorrow — when he hears the trigger. It’s perhaps the most broken we’d seen Saul in all eight seasons. In that scene in particular, Glatter pulls out a terrific performance from guest star Mukha, who made us feel for, root for and care about a character we’d known for two episodes.

At the end, the episode jumps ahead two years to reveal that Carrie is living with Yevgeny (Costa Ronin) in Russia. But there’s a twist, to which the final 10 minutes slowly build. Saul receives an advance copy of Carrie’s new book “Tyranny of Secrets: Why I Had to Betray My Country,” which is intercut with scenes of Carrie swapping purses with another woman during a bathroom break at a jazz concert in Russia. When Saul finds a note from Carrie in her book’s binding (which is how he communicated with Anna), it becomes clear: Carrie is Saul’s new Russian asset. Joy and gratitude dawn on Saul’s face, which is followed by the final shot of the series: Carrie bobbing her head to the music with a smile. Glatter’s choice to end the series with this particular shot sums up who Carrie is and has always been at her core: a loyal patriot.

While Alex Gansa and Horward Gordon’s script is a large contributor to the finale’s top-notch quality, it’s Glatter who incorporates all the themes and storylines on the page into one seamless fabric. Surely, her peers within the TV academy will recognize the difficulty that comes with wrapping up a series, especially one that’s been on the air for eight seasons. This past decade alone, Emmy voters shortlisted the series closers of “Game of Thrones” (2019), “Downton Abbey” (2016), “The Knick” (2016), “Boardwalk Empire” (2015), “Breaking Bad” (2014) and “Lost” (2010) for Best Drama Directing.

A seven-time Directors Guild Award nominee and two-time winner (for “Mad Men” in 2010 and “Homeland” in 2015), Glatter has already been amply recognized by her peer group throughout the years, even for her efforts on “Twin Peaks” in 1991 and on “Homeland” in 2014 and ’19, the latter two for which she didn’t reap Emmy noms. Ironically, the latter two are her only Emmy-submitted “Homeland” directorial efforts that didn’t translate to nominations. But in both years the show also didn’t crack the Best Drama Series lineup — which doesn’t mean she can’t get nominated when the show itself isn’t; she already defied those odds in 2017 when hers was one of the show’s mere three bids.

With two additional citations as an executive producer on “Homeland” in 2015 and ’16, Glatter’s been nominated a total of seven times at the Emmys, but she’s never won. Although she’s proven to be independent of the show’s overall performance at the Emmys, if it were to sneak into the drama series lineup, this might just be her year. In 2009, “ER,” after having not been nominated for directing since 2004 and without a series bid, shocked with a win for its finale, helmed by Rod Holcomb, who had also directed the pilot.

The only directing nom “Homeland” netted that wasn’t for Glatter was in 2012 for Michael Cuesta’s work in the pilot, at which point she hadn’t even made her series debut yet. After 35 years of work on the big and small screens — she’s also an Oscar nominee for her live action short film “Tales of Meeting and Parting” (1985) — voters might finally want to pay their respects to her and make her just the fourth woman to win the category.