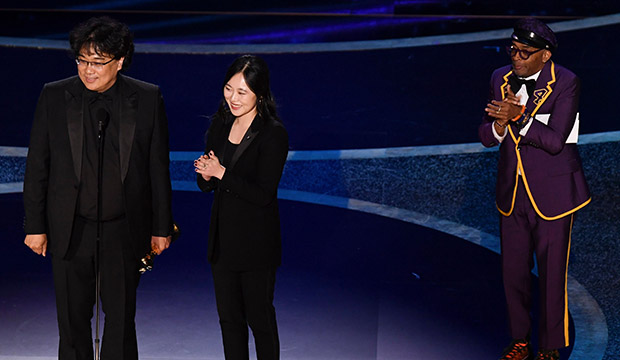 The biggest shocker at Sunday’s Oscars came in a category where few thought there would be one: Best Director. Sam Mendes appeared to have that on lock after claiming the corresponding prizes at the Golden Globes, Directors Guild of America Awards and the BAFTAs for “1917.” “Parasite” winning Best Picture over “1917” had better odds in our predictions than Bong Joon Ho did of beating Mendes. So how did Bong pull it off?

1. The passion is real and spectacular
Last week, I argued that “Parasite” would win Best Picture because it was the “Fleabag” of the Oscars, aka there was and is tremendous passion for it. In hindsight, I should’ve taken the analogy further because Bong is the Phoebe Waller-Bridge and Mendes is the Julia Louis-Dreyfus here. Just like with “Parasite” and Best Picture, “Fleabag” had better odds of winning the Best Comedy Series Emmy than PWB did of beating six-time champ JLD for Best Comedy Actress. We were just going by the records — Louis-Dreyfus had never lost for “Veep” and Mendes had won all the precursors (he and Bong shared the Critics’ Choice Award in one of its classic ties). In the end, we underestimated the passion for both “Fleabag” and “Parasite” — the love for them were so strong that they were able to carry their masterminds to wins in categories most of us thought they didn’t have much of a shot in. As Fleabag would say:

The preferential ballot is about building consensus to find a winner that is the least disliked, and one way of getting there is with overwhelming passion. “Moonlight” (2016) had passion too when it upset “La La Land” to win Best Picture, as did Olivia Colman (“The Favourite”) when she took down Glenn Close (“The Wife”) last year in Best Actress. But the rapturous affection for “Parasite” eclipses that of both, and now the history-making phenom is just the third film in the last eight years to win Best Picture and Best Director.

2. #BongHive rise!
Bong was the man of the season. He was the person everyone — buzzing from having seen “Parasite” — wanted to meet, and they all love him after meeting him. He’s a likable, warm guy who films his cast winning awards like the proud dad he is and was indefatigable on the circuit (remember that this started for Team “Parasite” back in May at the Cannes Film Festival).

Bong is not a newbie by any means — he’s been making awesome films for more than 20 years — but “Parasite” is his first true crossover success that appeals to every type of moviegoer there is. There’s excitement around him, a rock star having his moment, more so than there was with Mendes making an Oscar comeback with a war movie.

3. The DGA membership is different
DGA is one of the most sturdy precursors, as it’s only mismatched with Oscar seven times before this year, and in three cases, the DGA winner wasn’t Oscar-nominated. But the DGA also has a much larger and broader membership — 16,000 people versus 526 in the academy’s directing branch — and is more American. The academy has made an aggressive push for inclusivity the past few years, and part of that includes adding more international filmmakers. Since the entire academy votes for the winners, the widespread support that “Parasite” clearly had — don’t forget it also won at the Screen Actors Guild, Writers Guild, the ACE Eddie and Art Directors Guild Awards — was probably enough to boost Bong even if you assume most of the directors voted for Mendes.

SEE Glory to the holy WiFi! 7 ways ‘Parasite’ made history with its Oscar wins

4. Or maybe the directors also surprised us again
We’ll never know how many of the academy’s directing branch voted for Bong or Mendes here or at DGA. But the directing branch has given us some surprises lately with its eclectic taste. Last year, the directors snubbed DGA nominees Bradley Cooper (“A Star Is Born”) and Peter Farrelly (“Green Book”), the latter of whom, of course, helmed the eventual Best Picture winner, in favor of Yorgos Lanthimos (“The Favourite”) and Pawel Pawlikowski (“Cold War”).

Seven years ago, we got one of the craziest DGA/Oscar deviations ever when there was only a 2/5 match. Presumptive frontrunner Ben Affleck (“Argo”), who swept everything except the Oscar, was MIA, as were fellow DGA nominees Kathryn Bigelow (“Zero Dark Thirty”) and Tom Hooper (“Les Miserables”). Michael Haneke (“Amour”), David O. Russell (“Silver Linings Playbook”) and Benh Zeitlin (“Beasts of the Southern Wild”) instead made the Oscar cut. All this to say, what if this time the directing branch surprise came in the winner phase instead of the nomination phase like we were used to? For all we know, Bong could’ve topped the ballot in the nomination round as well.

5. Mendes was a previous winner going for a rare record
Maybe this would play out differently if Mendes were Oscarless, but he has a statuette at home for his directorial debut “American Beauty” (1999). If you were torn between him and Bong, that knowledge might sway you to check off the latter. This was Mendes’ first nomination since his win and he would’ve set a record for the longest gap between directing victories at 20 years. Had he won, he’d also would’ve been just the third person with a 2/2 record in the category after Frank Borzage way back in the early days for 1927/28’s “7th Heaven” in the dramatic category and 1931/32’s “Bad Girl,” and Alfonso Cuaron for 2013’s “Gravity” and 2018’s “Roma.” They’re two of 21 directors with multiple wins in the category, and the other 19 did not bat 1000.

In other words, it is incredibly difficult to maintain a winning record with multiple nominations in directing, and honestly, Mendes’ domination the past month made it almost look too easy: coming in late and then running the table with a one-take wonder, especially in a field that contained Martin Scorsese (“The Irishman”) and Quentin Tarantino (“Once Upon a Time in Hollywood”), the two people many thought would be duking it out in the end earlier this season. Cuaron managed to go 2/2 last year, but he also didn’t have to face the director of the Best Picture winner that beat his movie. Mendes had to face his biggest competition with the most passion behind it, and lost.