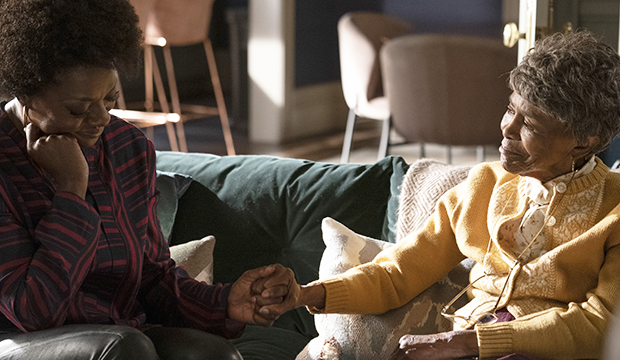 Cicely Tyson has already claimed three Emmys, two for “The Autobiography of Miss Jane Pittman” in 1974 (Best Movie/Mini Actress and Actress of the Year) and one for “Oldest Living Confederate Widow Tells All” in 1994 (Best Movie/Mini Supporting Actress). But despite four Best Drama Guest Actress (2015, 2017-19) nominations for “How to Get Away with Murder,” she has yet to triumph for her turn as Ophelia Harkness. Might she, at long last, bag one for the show’s sixth and final season?

A 15-time nominee, Tyson looks safe to scoop up her 16th career bid, currently topping our early combined odds. The only year she was left out for “Murder” was 2016 for its second installment — but she was on the same ballot that year for “House of Cards.” Considering the latter netted eight acting citations that year, five of which were for guest actors, it’s probable that Tyson split her own vote. This is reinforced by the fact that she returned for “Murder” the following three years — even when the show’s star Viola Davis was dropped from the Best Drama Actress category for the first time in 2018.

The last time Tyson was the frontrunner in our odds was on her first “Murder” bid in 2015, but she was beaten by “The Americans’” Margo Martindale. Her most recent three go-arounds have coincided with “The Handmaid’s Tale’s” domination in the category, with wins for Alexis Bledel in 2017, Samira Wiley in 2018 and Cherry Jones in 2019. Bledel and Jones are back in the running for “Handmaid’s” (Wiley has moved up to supporting), and are in second and fifth places in our odds, respectively. Rounding out the top six are Phylicia Rashad for “This Is Us,” Jones for “Succession,” and Julie Dretzin for “Handmaid’s.”

SEE I rest my case: ‘How to Get Away with Murder’s’ Viola Davis could have the latest Emmy-winning closing argument [WATCH]

Tyson had a lot going for her on her first try — “Murder” was a red-hot new show, and it’s the only year Davis won for it — so her loss to Martindale, who was just in a few minutes of her submitted episode, is still rather surprising. But the legendary star could now capitalize on collective goodwill and ride an overdue narrative (for “Murder” specifically) to a win, boosted by the fact that it’s voters’ last shot at rewarding her for this role. If she makes the lineup, she’d set a new record as the category’s most nominated actress with five bids, a title she currently shares with Shirley Knight, Martindale, Diana Rigg and Alfre Woodard. And if she wins, at 95, she would become the oldest winner in this category; if she doesn’t, she’d hold the unfortunate record for the most nominations without a win.

She faces stiff competition from “Handmaid’s,” which has never lost this category. She could have a leg up over, at least, Bledel and Jones since they’ve already prevailed. Plus, if “Handmaid’s” runs this category (Clea DuVall also contends for it), the actresses risk splitting the vote. Tyson might then have to then duke it out with another overdue thespian, Rashad, who has four career bids and was the projected winner for “This Is Us” last year, but lost to Jones — who, ironically, was also just in a few minutes of her episode.

In “Murder’s” sixth season, Tyson appeared in the 11th and final episodes, “The Reckoning” and “Stay,” respectively, of which she’s likely to select the former as her submission, given that she has significantly more screen time in it. Ophelia visits Annalise (Davis), who’s been put under house arrest after being accused of possessing false documentation and falsifying her passport. Ophelia unloads a handful of sassy one-liners that, by now, we’ve certainly come to expect, during which Tyson continues to effortlessly channel her character’s wicked sense of humor and no-nonsense mentality.

For the very first time, Annalise reveals to her mother that she’s had relationships with women — to be exact, Eve (Famke Janssen) — at which Ophelia’s face contorts. This reaction isn’t driven by discrimination, but guilt — an expression that quickly, but subtly, dawns on Tyson’s face. In a heart-to-heart with her daughter in bed, Ophelia expresses concern that Annalise’s interest in women might be an unfortunate result of her being raped by her uncle Clyde when she was a child. When Ophelia asks whether she loved Eve, Annalise answers in the affirmative (and says Eve loved her, too), to which Ophelia responds with a loving squeezing of her hands. This intimate interaction highlights Tyson’s warm, comforting presence, as well as her undeniable chemistry with her onscreen daughter.

SEE Emmy spotlight: Viola Davis’ stunning turn in ‘How to Get Away with Murder’s’ series finale is to die for

In a later scene, Ophelia refers to her absence during her daughter’s childhood as the main source of Annalise’s rage. Tyson’s raw delivery of “Where was I?!” encapsulates the regret she feels for leaving Annalise at home with Clyde while she went off to work multiple jobs — which Annalise reminds her that she only did to keep them afloat. But Ophelia fears that because Annalise has never felt properly protected, she now feels as though she has to rely solely on herself. She calls on her daughter to stop protecting the people around her and finally start protecting herself.

Tyson’s appearance in the series closer should only further propel her chances, as her brief presence is thoroughly felt. Annalise has been charged with multiple counts of murder, including that of her husband Sam (Tom Verica). Tyson shines in her scene opposite Davis, in which Annalise spells out her fear that she won’t be able to defend herself in court as she doesn’t consider herself worthy of such defense. Ophelia, concerned but more honest than ever before, tells her daughter it isn’t her decision to make, but God’s, so all she needs to do is fulfill her one duty: “show up.” In a final sequence, it’s revealed that Ophelia dies soon after, presumably of old age.

Concluding on May 14, “Murder” ended a season in the final month of eligibility for the first time (it usually ended in March), which could put it top of mind for Emmy voters. Last year, it managed to get away with three nominations — its highest total for a single season thus far — when no one expected it. In addition to Tyson’s fourth nom, Davis returned to the drama actress lineup, while Glynn Turman snagged a guest bid for his portrayal of Nate Sr. If the show was already on voters’ radar last year, then it might especially be this year — its season having not only aired at the perfect time, but it being the final one.