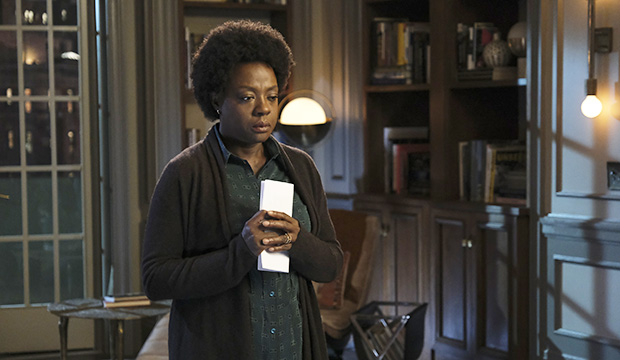 Viola Davis has accrued four Emmy nominations in Best Drama Actress (2015-17, ’19) for her portrayal of Annalise Keating on ABC’s “How to Get Away With Murder” — of which her first translated into a win — and one in Best Drama Guest Actress (2018) for bringing Annalise to “Scandal.” On May 14, “Murder” ended its six-season run with “Stay” — or as I prefer to call it, the episode that will help Davis get away with her sixth Emmy bid.

The finale centers on the conclusion to Annalise’s trial on multiple murder charges, including those of her former student Asher Millstone (Matt McGorry) and husband Sam Keating (Tom Verica). Before Annalise gives her closing argument, she gets two pep talks from Nate (Billy Brown) and her mother, Ophelia (Cicely Tyson), which allow for moments of calm before the storm.

In the first season, Annalise frames Nate for Sam’s death to protect her students, but now when Nate has the chance to reciprocate, he takes the high road by testifying in Annalise’s favor and giving her Wes’ (Alfred Enoch) confession letter, which would have been a liability to her trial. After years of tension between the once on-and-off couple, they make peace. For most of the scene, Davis is silently reacting to Brown, but with gratitude dawning on her face as Nate offers Annalise forgiveness, an act of kindness to which she isn’t accustomed. So much so that you instantly see excuses as to why she doesn’t deserve it begin to brew in her head, which Nate torches, telling her to take responsibility for how she ended up in this situation. Davis fuses these contrasting emotions into a single perfect tear that Annalise sheds as Nate is on his way out.

SEE I rest my case: ‘How to Get Away with Murder’s’ Viola Davis could have the latest Emmy-winning closing argument [WATCH]

Nevertheless, Annalise doesn’t know how to defend herself in court when she doesn’t even believe she’s worthy of such defense. But Ophelia has a few words for her daughter: What happens isn’t her decision but God’s, so she better get it together and fulfill her one duty: “show up.” This elicits another little-seen reaction from Annalise: vulnerability. She’s spent most of her life protecting and defending other people, so when she’s called on to defend herself, she wavers. Opposite Tyson, Davis’s eyes water, but she never breaks into full sobbing. Annalise is caught between a rock and a hard place, but is well aware that she has to keep it together, not just for her mother but for herself.

“I’ve worn a mask every day of my life […] all to create a version of myself that the world would accept. But I’m done.” In her closing argument, Annalise takes Nate’s words to heart and confesses her true faults and crimes to the court. And because her mask is off, she admits to, yes, being a bad person (having done many unvirtuous things), but a murderer she is not. She concludes: “Who I am is a 53-year-old woman from Memphis, Tennessee, named Anna Mae Harkness. I am ambitious, black, bisexual, angry, sad, strong, sensitive, scared, fierce, talented, exhausted — and I am at your mercy.”

As Annalise, Davis has given many gigantic courtroom speeches, either as a lawyer burning witnesses at the stake or vice versa, but, ironically, never before in such a calm, collected manner as in her closing argument. After years of constant self-blame and self-loathing, Annalise reflects on the mistakes she made, but also on the ones she didn’t make, and in doing so, finds a way to be at peace with herself. The visceral effect of her character development might not have been as palpable had Davis delivered the speech in a more flamboyant fashion. At the same time, Annalise’s words are amplified because they express not only her own hardships, but those of marginalized groups, including African-Americans and the LGBTQ+ community.

SEE Will Viola Davis and Cicely Tyson bid goodbye with Emmy noms for ‘How to Get Away with Murder’s’ final season?

It isn’t just Annalise’s arc that comes full circle here. Davis has discussed how mortified she was when she first slipped into Annalise’s shoes. Not only because she was playing a sexualized, complicated and messy character of her age, color and physique, but because she was concerned that few people would believe her in this role, with her wig, high heels and fake eyelashes — in other words, her character’s façade. She broke ground in Season 1’s “Let’s Get to Scooping,” in which Annalise takes off her wig, eyelashes and makeup before going to bed — something we rarely see on the big and small screens — revealing Davis’ (and thus Annalise’s) true self. And here Annalise is, at the end of her journey, in her truest and most natural form, coming to terms with who she is below her surface.

Ultimately, the jury finds Annalise not guilty of all charges. But during a press conference on the courthouse steps afterwards, Frank (Charlie Weber) shoots Governor Birkhead (Laura Innes), and both he and Bonnie (Liza Weil) are killed in the crossfire to Annalise’s devastation. In a matter of minutes, Annalise loses two important people in her life. But after being put through the wringer one last time, the show’s final sequence reveals that she eventually dies of old age (and isn’t murdered) after living her life to the fullest. In her final scene, she walks down a beach, alone but at peace, and although it’s very brief, you can see all Annalise’s peaks and troughs because Davis wears them on her face, like she’s been through them all herself.

With this being the final season — which concluded much later in the Emmy cycle than its preceding installments did — Davis might be able to capitalize on goodwill from her peers. The first African-American to take home the award for Best Drama Actress, she only ever missed the lineup once for “Murder,” in 2018 for the fourth season, but that’s also when she snuck in for “Scandal” in guest. She was able to return last year, which saw the show unexpectedly amass its most nominations for a single season thus far, with guest bids for Tyson and Glynn Turman. Since both Davis and Tyson had already been nominated for the show before, their inclusions weren’t all that surprising, but Turman — a drama guest actor winner for “In Treatment” (2008) — was all the way down in 13th place in our odds. His bid might have been an indication that “Murder” was on voters’ radar, and if it was last year, it’s probably on there this year as well.

Davis’s competition is stiff though. Many of 2018’s big players sat out last year’s cycle, but are back now. “The Crown,” “The Handmaid’s Tale” and “Westworld” are among those returnees with viable contenders in the lead actress race, all of whom currently place in the top 10 in our odds (“Westworld’s” Evan Rachel Wood is in ninth). Apple TV+ is looking to secure two spots for rookie “The Morning Show” with Aniston and Reese Witherspoon, the latter of whom also contends alongside Kidman for “Big Little Lies,” which competed as a limited series in 2017 (and racked up eight statuettes, including for Kidman), but is now considered a drama.

What do you think? Will Davis get away with her sixth nomination?