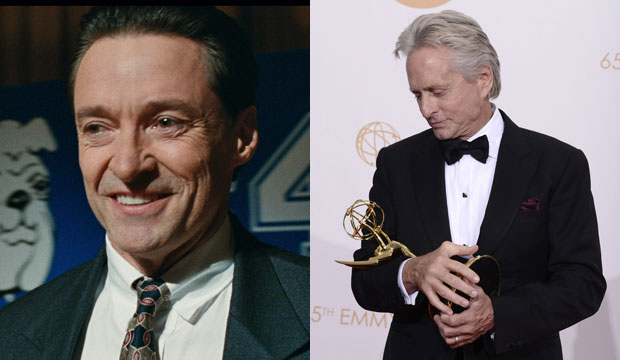 Hugh Jackman earned rave reviews for his performance as a corrupt school superintendent in HBO’s telefilm “Bad Education,” which makes him an Emmy contender for Best Movie/Limited Actor. But is it a disadvantage these days to star in a TV movie? Telefilms aren’t as prominent as they have been in the past, especially when you compare them to the way limited series and anthologies have exploded in the last 10 years. Indeed, if Jackman wins the Emmy he’ll be the first to take this prize for a standalone film in seven years.

The last such winner was Michael Douglas, who won in 2013 for playing famed entertainer Liberace in Steven Soderbergh‘s biopic “Behind the Candelabra,” which also aired on HBO. The year after that Benedict Cumberbatch also won for a TV movie, “Sherlock: His Last Vow,” but really “Sherlock” was a continuing series that entered one of its episodes every season as a standalone movie. Since then every winner has come from a limited or anthology series: Richard Jenkins in “Olive Kitteridge” (2015), Courtney B. Vance in “The People v. O.J. Simpson” (2016), Riz Ahmed in “The Night Of” (2017), Darren Criss in “The Assassination of Gianni Versace” (2018) and Jharrel Jerome in “When They See Us” (2019).

Actors have been nominated for one-and-done movies in those years in the kinds of baity roles that used to be slam dunks at the Emmys, like Bryan Cranston as President Lyndon Johnson in “All the Way” (2016) and Robert De Niro as crooked financier Bernie Madoff in “The Wizard of Lies” (2017), but weren’t able to win. And in 2019 every nominee for Best Movie/Limited Actor came from a limited series.

But “Bad Education” comes at an opportune time, premiering this spring during an unforeseen global health crisis that has people stuck indoors looking for entertainment and finding much of it in the criminal underworld — just look at how much media buzz “Ozark” and “Tiger King” have generated. And “Bad Education” features the one-two punch of Jackman and co-star Allison Janney, both already Emmy winners, in a story of corruption that resonates in our current climate where political corruption almost goes without saying.

As of this writing we give Mark Ruffalo the Emmy advantage with 71/20 odds based on the combined predictions of more than 2,000 Gold Derby users. He plays twins in “I Know This Much is True” — yes, a limited series. But Emmy Experts Jen Chaney (Vulture) and Jazz Tangcay (Variety) are betting on Jackman, and so are two of our Top 24 Users who got the highest scores predicting last year’s Emmy nominations. So crime might pay for Jackman’s nefarious performance.