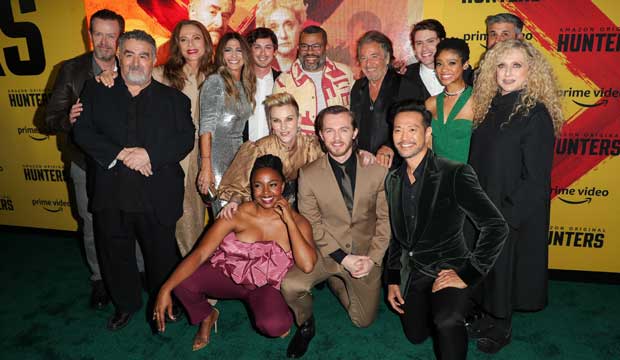 Set in 1977 New York City, “Hunters” follows a diverse band of Nazi hunters who discover a secret plan to create a Fourth Reich in the U.S. Oscar and Emmy winner Pacino (Oscar for “Scent of a Woman,” Emmys for “Angels in America” and “You Don’t Know Jack”) headlines his first TV series as Meyer Offerman, the wealthy leader of the vigilante band. Lerman stars as Jonah Heidelbaum, a new recruit to the team.

Peele introduced the pilot episode, recounting how he first met Weil long before his 2017 directorial debut “Get Out” was made. “I was telling him about ‘Get Out,’ and how it was this crazy idea no one was ever going to make, but I was dedicated to writing it anyway,” he recalled. “I saw this spark in his eyes, and I knew he had a project like that.”

After “Get Out” became a box office hit and snagged Peele an Oscar for Best Original Screenplay, he started looking for new projects for his company, Monkeypaw Productions. He read Weil’s script, a “saga” that was “not only well researched” and “well prepared,” but also filled with “emotion.” He admitted to seeing a bit of himself in the work, “because I knew he had a story that was about representation, that was about personal, social catharsis. It was a story that I wanted to see, and I had to see, and I knew we had something special.”

In creating “Hunters,” Weil wanted to tell “a story about superheroes we rarely see onscreen: Jewish superheroes, black superheroes, a Japanese-American superhero. A band of others reclaiming their power, donning capes and masks and seeking revenge, justice and existence in a world that often denies and exterminates them, at a time when we need heroes more than ever.”

Following the premiere, the audience gathered for a star-studded after party at the London West Hollywood Penthouse, where they were treated to free drinks and hors d’oeuvres. They were also able to visit the Denim Bar to claim a groovy, custom-made jacket.

Audiences can get their own look at “Hunters” when it premieres globally on Amazon Prime Video on Friday, February 21.

Mark Swift ('The Croods: A New Age' producer) tells of the challenges of creating a new antagonist for…