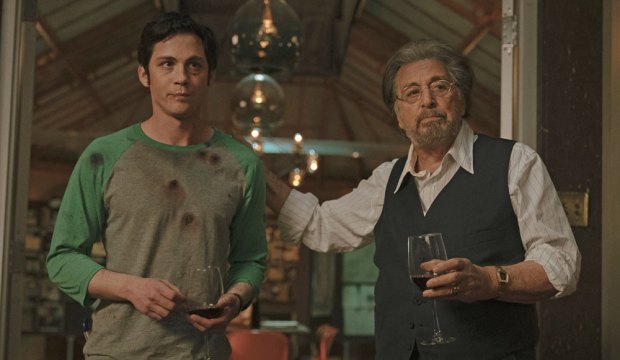 Amazon’s high-profile new drama series “Hunters” premiered on Friday, February 21. It’s the first regular series role for Al Pacino. The Oscar-winning actor has Emmys for the limited series “Angels in America” and the telefilm “You Don’t Know Jack.” Could he be on his way to a third win for his role as a vigilante tracking down and exacting revenge against Nazis?

Set in the 1970s, the series stars Pacino plays Meyer Offerman, a wealthy Jewish man who assembles a ragtag group to investigate and execute Nazis living secretly in the US and plotting to bring about the Fourth Reich. The actor’s performance has a “confident wisdom” and “impish cleverness.” He keeps it at a “low rumble,” which makes his “rare outbursts more powerful.” He provides “a balanced through-line” that grounds the sensationalist story.

Created by David Weil, the series “embraces a comic-book ethos” with some added “Tarantino-flavored flair” — “Inglourious Basterds” seems to be a strong influence. The reviews are somewhat reminiscent of “Jojo Rabbit,” a satirical take on Nazi Germany. There was passionate support for that film which included an Oscar for Taika Waititi‘s adapted screenplay. Might we see similar love for “Hunters” from the TV academy? Pacino is already a two-time Emmy winner. Executive producer Jordan Peele is an Emmy winner too, and his industry esteem skyrocketed from there with his Oscar-winning work on the horror film “Get Out.”

Will you be binge-watching “Hunters”? Check out some of the reviews below, and join the discussion on this and more with your fellow TV fans.

Kristen Baldwin (Entertainment Weekly): “‘Hunters’ creator David Weil, whose own Safta survived the Holocaust, openly embraces a comic-book ethos and embellishes it with Tarantino-flavored flair … This may all sound a little glib for a show about bringing ‘God’s justice’ to Nazi war criminals, but ‘Hunters’ deploys its surreal (and much-needed) humor strategically … [Pacino] keeps the volume of his Germanic growl at a low rumble, which makes Meyer’s rare outbursts more powerful.”

Kelly Lawler (USA Today): “It’s a huge meal of a concept to swallow, one that is wildly ambitious if not always fully realized in ‘Hunters’ … Bold, graphically violent and imperfect, the series tells a story of culture, religion, righteousness and revenge against a backdrop of blood, grief and excruciating pain. ”

Dan Feinberg (Hollywood Reporter): “There’s a confident wisdom and impish cleverness to what Pacino is doing, a sense of fun that comes from watching the wheels spin in this iconic star’s head. It’s just hard to judge it using traditional metrics of quality. The same is true of ‘Hunters’ as a whole.”