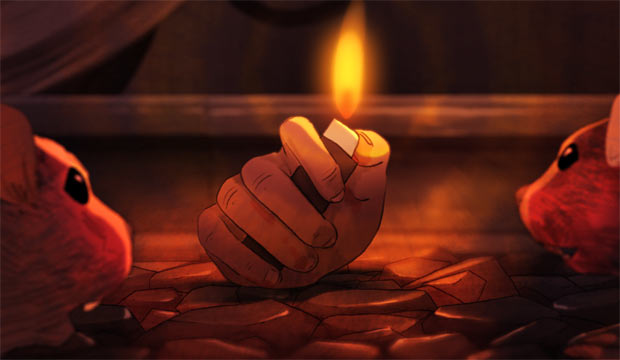 The battle for Best Animated Film has already gotten bloody, but French filmmaker Jeremy Clapin‘s “I Lost My Body” has gotten a grip. And it doesn’t play with kids. This is the adult sandbox. “What a dream,” says Clapin. “Who would have thought an adult animated film about a severed hand could be Oscar nominated?”

Who indeed? Buzz, Woody, your Dragon and a Missing Link or two may be in for a rude awakening in the race for Best Animated Feature, where “I Lost My Body” earned a nomination when the academy announced their contenders on January 13. Clapin says animation is film and deserves an equal playing field. Even if that’s never going to happen. “I’m always compared to another animation film, and I want to be compared to regular cinema. I make movies. It’s just another way to tell a story.”

The first animated film he ever saw? “Maybe it’s ‘Snow White.'” But that wasn’t his inspiration for getting into the field. “I started in animation because I wanted to make films, not animation. But I was shy and I liked doing things alone.”

SEEOscars 2020 nominations: Best prediction scores by our Editors and Users

His pitch for this particular film, about a severed hand that wanders the streets of Paris, wasn’t an easy sell. He’s still not sure he ever sold it completely. But something worked. It won the Grand Prize at Cannes — a first for animated film. And it has won accolades from several critics’ groups around the country.

“We were quite alone in making this film. It was difficult. But Cannes gave us terrific exposure. It shows that risk can pay. We have a weird pitch about a severed hand. It invokes ‘The Addams Family.’ So we needed the critics and press because without that we can’t exist. Most animation is from Disney for kids. Which is great, but it’s all we see. We need more mature and subtle animation. People will ask for more like this. But it’s a long process. We have to fight a bit.”

Clapin would like to see a day when awards shows put animation into two categories, one for kids the other for adults. But he admits that’s an even longer shot than a severed-hand movie getting an Oscar nom. “It’s a dream, but it’s not possible. Maybe we can invent a category for adult animation.”

In the meantime he’s glad for a streaming service like Netflix to get his film seen. “Netflix coming was a real change. We can’t reach a wide audience without them.”

And his next project? He actually has two. One live-action and another animated feature. But he won’t say anything else except, “No more severed limbs. I give up the body. But I like to use fantasy to tell a story. 80% characters, 20% fantasy.”

He’s got everyone’s attention now. That you have to hand to him. #SorryNotSorry